" ... In a few days, our devoted elected representatives will be asked to authorize continuing pay outs of millions more of our dollars to Halliburton, Fluor, DynCorp, etc. etc., not to mention the usual payoff from war in general for Lockheed Martin, Boeing, General Dynamics, etc.Why should we pay? It’s protection, stupid. Multi-billion dollar protection racket? ... " 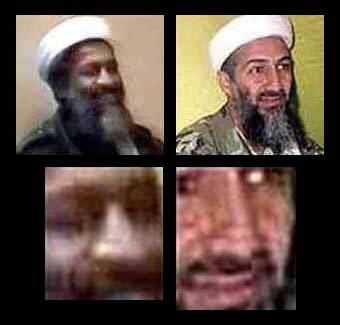 "See the picture [left]? The guy on the right is Osama bin Laden. Who’s the guy on the left? According to the government, it’s Osama bin Laden. Specifically, the guy on the left is Osama bin Laden confessing to the 9-11 attacks. You can watch the video here, but not anywhere else, because none of the mainstream media websites have 'the smoking gun of 9-11' on their websites any more. The tape was a revelation, because on a tape leaked to Al-Jazeera on September 16th of 2001, bin Laden denied involvement in 9-11. The above tape was supposedly “found” by the C.I.A in a ruined house in Jalalabad, Afghanistan in November, 2001. You can read the official story about that ... Once the C.I.A. 'found' the bin Laden confession video, they had a link between 9-11, the Taliban (which had supported bin Laden), and Afghanistan, which our government wanted to invade. This tape was the justification which led directly to U.S. soldiers invading Afghanistan. They’re still over there, folks! Too bad 'In 2006,' Rex Tomb of the FBI’s public affairs unit said, 'The reason why 9/11 is not mentioned on Osama bin Laden’s Most Wanted page is because the FBI has no hard evidence connecting bin Laden to 9/11.' OOPS! Who then, pray tell, coordinated the attacks on September 11th of 2001? Must have been the Iranians, I guess!" 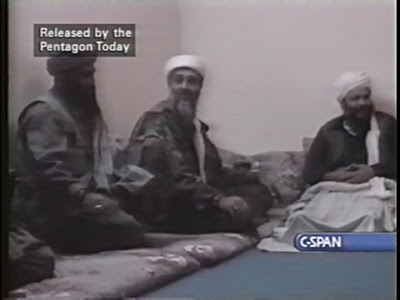 Video of bin Laden released in 2001 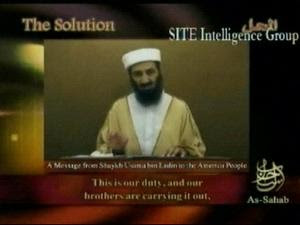 Washington Post: " ... Bin Laden, after denouncing the 'capitalist system' that 'seeks to turn the entire world into a fiefdom of the major corporations,' called for Americans to convert to Islam because, among other things, taxes are lower in Islamic states. It's a bizarre, almost ridiculous, video - and before it is forgotten in the coming debate on Gen. David Petraeus's Iraq report, it's worth spending a few minutes, on the sixth anniversary of Sept. 11, trying to understand what it might mean.

"I am not alone, I should note, in wondering whether a man who is supposedly hiding in the Hindu Kush could possibly care about the 'insane taxes and real estate mortgages' endured by Americans. A number of commentators are suspicious about the video, in which bin Laden has dyed his beard jet black -- either a sign that he intends to renew his jihad or evidence that the tape, though authenticated by the CIA, is fake."

"Others wonder whether the speech, which makes approving references to the wisdom of Noam Chomsky yet garbles the chronology of the Vietnam War, might actually have been written by Adam Gadahn, an American who does English-language propaganda for al-Qaeda, has been indicted for treason and now is featured on a Justice Department 'wanted' Web posting, along with bin Laden himself. ... "

Osama tape fake after all?
American Thinker
James Lewis
Is it an OsamaBot? Or a clever audio forgery?

Blogger George Maschke at Boomantribune.com has spotted an intriguing bit of cutting and splicing in the latest video purported to be from Osama Bin Laden. The only evidence that the video is authentic is that Osama's presumed voice refers to recent events. But as Maschke writes, "All references to current events, such as the 62nd anniversary of the U.S. atomic bombing of Japan, and Sarkozy and Brown being the leaders of France and the UK, respectively, occur when the video is frozen!"

Odd, isn't it? Maybe Osama has joined the worms in some cave after all, as many of us suspected. And maybe a voice-alike is doing the audio.

Otherwise, why freeze the tape just at the most crucial bit of evidence?

Maschke believes that "The audio track does appear to be in the voice of a single speaker. What I suspect was done is that an older, unreleased video was dubbed over for this release, with the video frozen when the audio track departed from that of the original video."

Well, no wonder Osama looks years younger in this tape. He's discovered the secret of eternal youth! It's like the 1989 movie A Weekend at Bernie's! Osama might be a little bit gaga, but with some help from his friends he looks like the real, live thing. Al Qaida even has its own "media production company," according to CNN. Anybody with cheap video software could produce this fake.

One of Osama's sons could have been used to do a voice-over, in a particularly goulish bit of terrorist showbiz --- but that's what these characters do anyway. What's the reason to have a young boy cut off some unfortunate man's head, except for terrorist showbiz?

And if Osama is alive, why freeze the video just at that point?

http://www.californiachronicle.com/articles/viewArticle.asp?articleID=35106V
••••••••••••••••••
"Blackbeard" Bin Laden and the Great American Protection Racket:
Can We Be Fooled Again?

In the new video, "Blackbeard" [bin Laden] says the US is losing in Iraq. He speaks fondly of the Democrats and Noam Chomsky. If you ask me, the people "bin Laden" really loves are Bush Sr., Dick Cheney, and Bush Jr. . . . [T]he bearded boogeyman sure seems to want to help the American Far Right. This is at least the third time he or al Qaeda has emerged like an evil genie from a magic lantern just in time to restore citizen support for the neoconservative agenda. . . .

I’m not kidding around, though, when I suggest that the U.S. military-industrial-security complex has been running a protection racket against U.S. taxpayers, and "bin Laden" is in on it, whether "he" knows it or not.

In a few days, our devoted elected representatives will be asked to authorize continuing pay outs of millions more of our dollars to Halliburton, Fluor, DynCorp, etc. etc., not to mention the usual payoff from war in general for Lockheed Martin, Boeing, General Dynamics, etc.

Why should we pay? It’s protection, stupid. Protection from . . . terrorism, personified by the boogeyman, who has appeared on TV with perfect timing—just before the Iraq War progress report—in the form of "Blackbeard" bin Laden.

Here in Iran I watch satellite TV—BBC, CNN international, EuroNews, Aljazeera English. Some of the commentators on these channels have been discreetly hinting that they have doubts about the identity of the black-bearded one. One commentator asked, "Can’t Al Qaeda afford a decent camera?" The picture is quite blurry; the channels show contrasting images of "bin Laden" in previous incarnations so that we can make our own comparisons. Another journalist remarked, "Funny that bin Laden knows so many details about internal U.S. politics, don’t you think?"