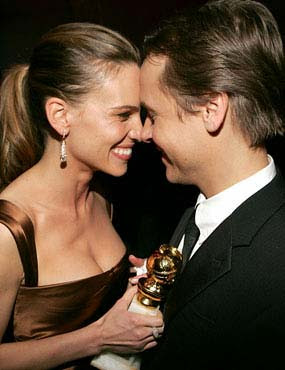 "I'd never heard of him," says Rob Silverstein, executive producer of Access.

"Jay Ireland, the head of the NBC TV stations, told me, 'You're going to use this guy,' which I wasn't too happy about. I didn't think he could do the job, and for the first couple of months, I was convinced I was right."

That was in 2001. Bush was brought on to cover events in New York for the California-produced show.

Earlier this week, Bush, already in Greece, was in an expansive mood as he discussed his rapid ascent. "I'm sitting in a cafe at the base of the Acropolis," he says, the sound of cutlery and dishes scraping in the background. "From my table, I can see a small piece of the Parthenon."

Ah, these are good times to be a Bush. Though he resents being asked about it, the TV personality is a silver-spoon cousin of the President.

"He's almost twice my age," he says testily, after repeatedly deflecting questions about his White House ties. "Our families live so far apart. There are 16 cousins. He is the second-oldest and I'm the youngest."

The future show-biz gadfly, now 32, was born in Manhattan to Jonathan Bush, one of George Herbert Walker Bush's younger brothers and a prominent Wall Street investment manager. After prepping at St. George's School in Newport, R.I., Billy Bush found himself rudderless at Colby College in Maine.

"I was really screwed as far as figuring out what I would do with my life," he says. "I chose my major with five minutes left [to declare]."

A stint on the campus radio station led to an on-air job at a tiny oldies station in New Hampshire. Through a friend of his father's, he upgraded to a classic-rock outlet in Washington, D.C., though he wasn't too familiar with the songs he was playing.

"I was definitely faking it," he says. "I was a 22-year-old kid hosting an oldies show. But everybody loves a little Thin Lizzy."

Eventually, he landed a weekly gig doing man-on-the-street reports for Today in New York, the local show that precedes Matt and Katie on WNBC-TV.

That's where Jay Ireland spotted him. "We and all the other entertainment shows would fly people in to cover openings and other events in New York," Ireland says. "I wanted someone to be there all the time for Access Hollywood."

He discussed the possibility with Bush, and the young comer forced him to make a quick decision.

"Everyone likes to drag their feet. But CNN called me at the same time about joining Paula Zahn's morning show," Bush recalls. "I called Jay Ireland back and said, 'CNN has offered me a job.' He said, 'Give me 48 hours.' I knew that getting coffee on network television is better than anchoring on cable news."

His initial appearances on Access didn't go well. "I sucked so profusely," he declares. "I was doing a knock-off of what I thought entertainment television should be."

After a couple of months, Silverstein sat him down.

"Ron said, 'You know the way we are when we're hanging out in the office? That's the way you need to be on the air,' " Bush says. " 'It's not about long-form interviews. It's about nuggets of fun and emotion.' I caught that and started having moments with people."

"From that point on, he became a different guy," Silverstein says. "I've never seen anyone learn so much so quick. He became the dominant force on the red carpet."

Bush's segments, consistently silly and exuberant, became the highlights of Access. His banter with the stars suggested a rapport that other correspondents could never pull off. And his gung-ho stunts - voguing with Heidi Klum, jogging through Central Park with Sean "P. Diddy" Combs - were memorable.

"He brought a fun, almost impish attitude to the segments," Ireland says. "The celebrity interview piece tends to be pretty standard, but he made it a blast. More importantly, the interviewees also had fun."

Bush's affability earned him a number of side projects, hosting beauty pageants such as Miss Universe and Miss USA, as well as a short-lived remake of the game show Let's Make a Deal.

But his aggressive side earned him some knocks. Working the pre-Oscar show for ABC in February, he ran around the Kodak Theatre like a linebacker, knocking actors aside to get to the celebrities he coveted, pulling people out of their seats to be interviewed.

Watching backstage on a monitor, the evening's host, Billy Crystal, observed, "This is the most annoying man in show business." The remark was overheard by a number of reporters, and has become a tag that Bush has had a hard time shaking.

"Did I go over the top? Some people think so," Bush says of his Oscar-night behavior. "But you have producers in your ear telling you who they want and not all of them are on the aisle," he says. "I did jump across some people. And I was leaning in so far to interview Sandra Bullock, I almost had a lap dance with Alec Baldwin."

Still, when Pat O'Brien defected to The Insider, the forthcoming companion show to Entertainment Tonight, after seven years as coanchor of Access, there was little question of who would replace him.

While Bush is in Greece for the next two weeks, his wife, Sydney, is moving into their new house in Los Angeles with the couple's daughters, Josephine, 5, and Mary Bradley, 3. A third daughter, already named Lillie, is due in October.

Bush is clearly concerned about switching coasts. "That's my biggest anxiety," he admits. "I'm a New York kind of guy, and I'm nervous I might not fit in."

But he's not intimidated by his new role on Access. "Before, I was counted on to give the show an infusion of energy," he says. "My new job requires me to do a little more blocking and tackling. I've got to change my game a little bit."

But don't expect him to turn into an anchor automaton. "I always go by the way I feel is natural," he says. "And my way is very different from everyone else's."
Posted by Alex Constantine at 10:34 AM