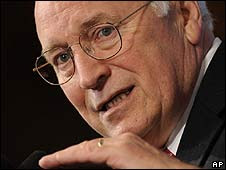 Former US Vice-President Dick Cheney gave direct orders to the CIA to conceal an intelligence programme from Congress, US media reports say.

The existence of the programme, set up after 9/11, was hidden for eight years and even now its nature is not known. CIA director Leon Panetta is said to have abandoned the project when he learnt of it last month.

He has now told a House committee that Mr Cheney was behind the secrecy, the unnamed US sources say. There has been no comment from Mr Cheney.

The claims come amid an increasingly bitter row between the CIA and Congress over whether key information was withheld about other aspects of the agency's operations.

House Speaker Nancy Pelosi has claimed that the CIA misled her about interrogation methods including waterboarding, while other senior Democrats have quoted Mr Panetta as admitting that his agency regularly misled Congress before he took office.

Details of the newly-revealed secret programme have still not been divulged, but sources say it did not relate to the CIA's rendition programme, interrogation methods or a controversial domestic surveillance project. Officials quoted by the New York Times say the programme was launched by anti-terror operatives at the CIA soon after the 2001 attacks, and involved planning and training but never became fully operational.

Another unnamed official told AP it was an embryonic intelligence-gathering effort, aimed at yielding intelligence that would be used to conduct covert operations abroad. Sources have told a number of US media outlets Mr Cheney personally instructed the CIA to withhold information about the programme from Congress.

Mr Panetta - who took over directorship of the CIA under President Obama's administration - is said to have learnt about the programme only on 23 June. The next day he called an emergency meeting with congressional intelligence committees to tell them about its existence and to say that it was being cancelled, the reports say.

The allegations come as Democrats in Congress are trying to push through new rules that would increase the number of members of Congress who are told about covert operations. The White House is threatening to veto the bill, fearing that operational secrecy could be compromised.

The CIA has not commented on the reports of Mr Cheney's role.

"It's not agency practice to discuss what may or may not have been said in a classified briefing," said spokesman Paul Gimigliano.

"When a CIA unit brought this matter to Director Panetta's attention, it was with the recommendation that it be shared appropriately with Congress. That was also his view, and he took swift, decisive action to put it into effect."