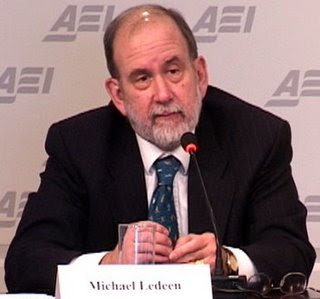 Re: Goofy Michael Ledeen, the Italian mole who pretends to be Jewish and spurs on illicit Middle Eastern wars with fits of "moral" hysteria:

... The fourth [variety of patriotism] is simply love of power and domination over others tarted up in patriotic rhetoric. It is exemplified by Jonah Goldberg, editor of the "conservative" National Review Online (NRO), in his comment on April 23, 2002 advocating we attack Iraq:

"I've long been an admirer of, if not a full-fledged subscriber to, what I call the "Ledeen Doctrine." I'm not sure my friend Michael Ledeen will thank me for ascribing authorship to him and he may have only been semi-serious when he crafted it, but here is the bedrock tenet of the Ledeen Doctrine in more or less his own words: 'Every ten years or so, the United States needs to pick up some small crappy little country and throw it against the wall, just to show the world we mean business.'" ...

Left unmentioned is that the only way to 'prove we mean business' and go to war somewhere because we "have" to, involves killing enormous numbers of men, women, and children who did us no harm at all. His outlook is the outlook of a murderer.

http://blog.beliefnet.com/apagansblog/2009/07/american-patriotism.html
Posted by Alex Constantine at 11:02 AM