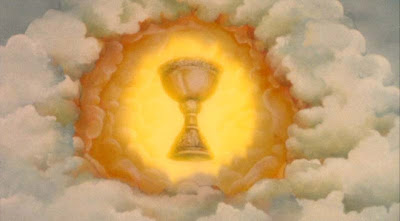 Derick Smith, 58, stole hundreds of pounds from a childhood friend after she took him in as a lodger when his marriage ended. He claimed they planned to start a business together, using a priceless silver goblet looted from the mansion of Hitler's right-hand-man Hermann Goering at the end of the Second World War. But when he changed his mind about offering the treasure as a guarantee to the bank, it landed him in court, he said.

Smith, who admitted fraud, said the 12in high silver cup - nicknamed the Unholy Grail - was behind a string of misfortunes he had suffered since it was passed to him by a family friend 32 years ago. Inscribed with Goering's name and the words, "In memory of the great time. 7.3.36," it was taken from the former chancellor and Luftwaffe chief's Karin Hall Lodge home in East Prussia in 1945.

Sunderland soldier Private George Armstrong found it among treasures at the lodge, many of which were wedding gifts bestowed in their thousands on Goering and his wife in 1923. Pte Armstrong, who served with the Royal Signals, wrapped the goblet in a blue velvet curtain and carried it out of the lodge in his army backpack but hid it in his loft because he worried about being taken to task by his superiors.

When he died, it was passed on to Mr Smith.

Judge Richard Lowden at Newcastle Crown Court heard how in May last year the former showjumper, of Stanley, County Durham, cashed forged cheques he had torn from the back of South Tyneside businesswoman Lesley Shaw's Royal Bank of Scotland chequebook. She had taken him in as a lodger when his marriage ended in 2007.

The pair began a relationship and Smith began to work as a driver and debt collector for Mrs Shaw, the court heard. But when he went missing in a Transit van which belonged to Mrs Smith, she became suspicious and realised money was missing from her bank account, prosecutor Tony Moran said.

Mitigating, Andrew Finlay said Smith had taken money he believed he was owed. Smith, who admitted fraud, was fined £200 and ordered to pay £335 compensation. Sentencing, Judge Lowden said he had committed a "mean crime".

He said: "You have a record for offences of dishonesty and cheating people. You have to be dealt with for, in effect, swindling your partner in whatever form of relationship that was."

Speaking after the hearing, Smith claimed he and Mrs Shaw discussed opening a stables using £200,000 raised against the value of the chalice. He said when he refused they fell out and their relationship broke down.

He blamed the chalice for poisoning their relationship.

He said: "Every time it seems to raise its head I end up in trouble. One day, I'll sell it. I'm happy for it to remain locked away in a bank vault until then."

Mrs Shaw denied ever having been in a relationship with Smith, and said she felt she had been betrayed.

She said: "The first I knew about any Nazi chalice was when the fraud investigation began and the police told me about it. We'd discussed starting up a stables but never once did I ask him for money and nor did he offer any. When the detectives told me all about his past and the things he'd done I felt betrayed. They said I had been a bit naive. I was just trying to help him. He is a liar and I feel used."

In March 2002, Smith was sentenced to nine months' imprisonment for blackmail after kidnapping a former friend's boxer dog when she refused to return the chalice, claiming it had been given to her in payment of a £40,000 debt.

In 2004, he was awarded ownership of the cup at Newcastle County Court and may now sell it. The relic is unique and worth between £1 million and £2 million, the court was told.