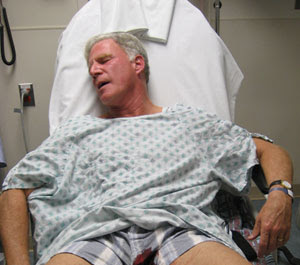 WASHINGTON -- A Maryland lobbyist was attacked by a deer outside his home and says the buck repeatedly stabbed him with its antlers, before he was able to wrestle the animal to the ground.

Gilbert Genn, a former state delegate from Montgomery County, says the bizarre incident occurred Thursday, as he left his Gaithersburg home to walk his dog, Yuffie. When the deer appeared on the front lawn of his home, his chocolate labrador ran to chase it off, but the buck didn't budge.

"[Yuffie] started circling it, and the deer didn't run. After a couple of seconds, I realized this was going to be a serious situation, because the deer then put its antlers down and was getting ready to charge Yuffie, who was barking at her," Genn said. "At that point I tore down the driveway screaming 'Yuffie get away.'"

But it was too late. The deer cut the dog off from his owner and went into attack mode. Before he knew it, Genn found himself face to face with the wild animal.

"It came right at me, from about 10 feet away. I tried to run at an angle, but it caught me flush in the back right leg, impaled me with its weight, knocked me to the ground. It started to come right at my face with its antlers."

The buck impaled Genn in the chest, but in the tussle he managed to land a swift kick to the animal's underbelly, causing it to momentarily abate. Genn said he then screamed for his wife to get the dog. As his wife approached the dog, the deer rammed Genn for the third time.

"It impaled me in the groin area. At that point, literally, I took the antler and pulled it out of me."

Genn said his mind flashed to the tragic death of "Crock Hunter" Steve Irwin and he realized he had to prevent getting stabbed in a vital organ. Genn then grabbed the deer by the horns and pinned it to the ground for a couple of minutes, until the animal tired out. He said he then released the animal and quickly ran the other way.

He sustained injuries to his leg, chest, and groin.

"I looked down and already my blue sweat pants from my groin area on down had turned purple, so I knew I was pretty badly injured and needed some medical attention. It was a pretty frightening experience."

But Genn did not go straight to the hospital. He tended to his groin injury with a paper binder clip, cotton and disinfectant, so he could make it to a long-planned meeting with Maryland House Speaker Michael Busch in Annapolis, close to 40 miles away.

"There was no way I could miss this meeting," Genn said.

The lobbyist, who served as a Democrat in Maryland's House from 1987 until 1999, joked that the attack may have had political ramifications.

Only after the meeting in Annapolis did Genn get himself to a hospital. He's now doing fine, following the attack, though he has been getting rabies shots as a precaution.

Genn said he also spoken to county animal control officials, who note that deer can be very aggressive during the rutting season, when they mate.