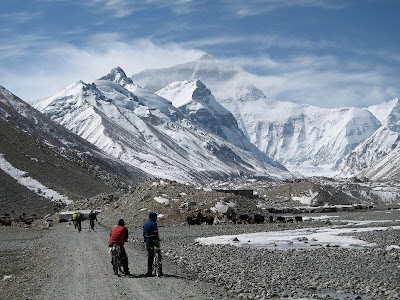 Around the world this week, as monks, exiles and supporters of the Dalai Lama marked the 50th anniversary of a failed Tibetan uprising, politicians and state-run media outlets in Beijing preached at length about the Communist Party's liberation of Tibetan slaves.

Meanwhile, in suburban Washington, John Kenneth Knaus, a retired CIA officer who led a covert command centre from New Delhi 50 years ago, worked on a new book about 100 years of American involvement in Tibet, including his own experiences feeding weapons and supplies to monks and resistance fighters.

On March 10, 1959, thousands of Tibetans surrounded the Dalai Lama's palace in Lhasa for fear that their spiritual leader might soon be abducted by the occupying force Mao Zedong had maintained in Tibet since 1950. Soon, protesters across the region were declaring Tibet's independence.

Seven days later the Dalai Lama was gone, spirited out of the country on horseback to India.

Some estimate more than 85,000 Tibetans died in the conflict that ensued as the Chinese army cracked down on the revolt.

Knaus had been working on the CIA's Tibetan file since the mid-1950s. Before taking up his post in New Delhi, he had helped train some 300 Tibetan resistance fighters in Colorado.

He says no American operatives were ever dropped into Tibet, though he says that in July 1958 and February 1959, the CIA did airdrop guns, hand grenades and rounds of munitions.

"The Tibetan revolt was instituted by the Tibetans and carried out by them," Knaus, 85, said in a phone interview this week. "It was not a CIA operation in essence."

In 1954, the Dalai Lama paid a diplomatic visit to Mao in Beijing. Soon after returning to Tibet he found many of his people, including monks, armed and open in revolt.

"The Chinese were trying to take their guns away from them. They (the Chinese) were really asking for it. The revolt was self-generated, completely."

In 1957, the Dalai Lama's older brother, Gyalo Thondup, recruited five men to be trained by the CIA on the Pacific island of Saipan. They were returned to Tibet to assess and organize the resistance. "At the time it was thought that this could make a difference," Knaus notes.

"The CIA had had a bitter experience by not being able to supply any real support to the Hungarian revolt a year earlier," when civilians in Budapest rose up against Communist rule and received encouragement and supplies from the CIA, only to be crushed by the Soviets when the Red Army rolled into the city. "So (the agency) didn't want to raise any false hopes and false expectations about what could be done in Tibet."

Knaus left the U.S. for New Delhi in 1960. Knaus estimates that in the years that under his watch he estimates, the CIA dropped 700,000 pounds of supplies to Tibetan rebels. But he says that by 1968, with the U.S. caught up in Vietnam and with the Chinese in control of the situation in Tibet, the resistance seemed "no longer technically or morally supportable," and the CIA withdrew its support.

In his 1999 book, Orphans of the Cold War: America and the Tibetan Struggle for Survival, Knaus laments the failure of the operation. But he says the essence of what the CIA-supported resistance fought for lives on in the peaceful protests sanctioned by the Dalai Lama and carried out by hundreds of thousands around the world today.

Knaus, who worked at the American Embassy in Ottawa for a time following his tenure in Asia, has met the Dalai Lama in the years since the CIA involvement in Tibet ceased. He says that although the Dalai Lama knew of the CIA's operations, he never gave them his blessing.

"The first time I met him in 1964, I didn't think he was terribly anxious to see me," recalls Knaus.

"Then I realized that I represented him with this moral dilemma. He knew that the CIA by then was and had been providing arms to his people. But, as a Buddhist, it was a terrible, complete moral dilemma for him."

He didnt seem to mind the US$1.7 million annually that the CIA was paying the TGIE and US$180,000 annually paid personally to the Dalai Lama. Maybe this is why he was not anxious to meet Knaus?