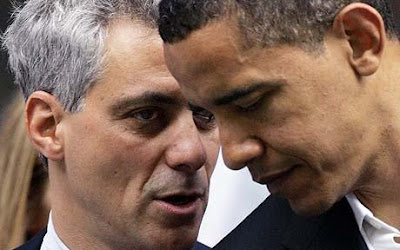 Last week in CounterPunch1, I wrote that the chair of the Democratic Congressional Campaign Committee (DCCC), Congressman Rahm Emanuel, had worked hard to guarantee that Democratic candidates in key toss-up House races were pro-war. In this he was largely successful, because of the money he commands and the celebrity politicians who reliably respond to his call, ensuring that 20 of the 22 Democratic candidates in these districts are pro-war. So the fix is in for the coming elections.

In 2006, no matter which party controls the House, a majority will be committed to pursuing the war on Iraq--despite the fact that the Democratic rank and file and the general voting public oppose the war by large margins. (I hasten to add that this state of affairs can be reversed even after the sham election between the two War Parties.)

What are Emanuel's views on war and peace? Emanuel has just supplied the answer in the form of a scrawny book co-authored with Bruce Reed, modestly entitled: The Plan: Big Ideas for America. The authors obligingly boil each of the eight parts of "The Plan" down to a single paragraph. The section which embraces all of foreign policy is entitled "A New Strategy to End the War on Terror," a heading revealing in itself since "war on terror" is the way the neocons and the Israeli Lobby currently like to frame the discussion of foreign policy. Here is the book's summary paragraph with my comments in parentheses:

"A New Strategy to Win the War on Terror"

("War on Terror," as George Soros points out, is a false metaphor used by those who would drag us into military adventures not in our interest or that of humanity.)

"We need to use all the roots of American power to make our country safe. (He begins by playing on fear.) America must lead the world's fight against the spread of evil and totalitarianism, but we must stop trying to win that battle on our own. (Messianic imperialism.) We should reform and strengthen multilateral institutions for the twenty-first century, not walk away from them. We need to fortify the military's "thin green line" around the world by adding to the U.S. Special Forces and the Marines, and by expanding the U.S. army by 100,000 more troops. (An even bigger military for the world's most powerful armed forces, a very militaristic view of the way to handle the conflicts among nations. What uses does Emanuel have in mind for those troops?) We should give our troops a new GI Bill to come home to. (More material incentives to induce the financially strapped to sign up as cannon fodder.) Finally we must protect our homeland and civil liberties by creating a new domestic counterterrorism force like Britain's MI5. (A new domestic spying operation is an obvious threat to our civil liberties; MI5 holds secret files on one in 160 adults in Britain along with files on 53,000 organizations.)"

There it is straight from the horse's mouth.2

How does Emanuel, the man who has screened and chosen the 2006 Democratic candidates for Congress, feel specifically about the war on Iraq, the number one issue on voters' minds. Emanuel and Reed do not so much as mention Iraq in their book except in terms of the "war on terror." Nor does Emanuel mention Iraq on his web site as among the important issues facing us, quite amazing omission and one shared by Chuck Schumer who is his equivalent of the Senate side, chairing the DSCC (Democratic Senatorial Campaign Committee). However a very recent profile in Fortune (9/25/2006), "Rahm Emanuel, Pitbull Politician," by Washington Bureau chief Nina Easton notes: "On Iraq, Emanuel has steered clear of the withdraw-now crowd, preferring to criticize Bush for military failures since the 2003 invasion. 'The war never had to turn out this way,' he told me at one of his campaign stops. In January 2005, when asked by Meet the Press's Tim Russert whether he would have voted to authorize the war-'knowing that there are no weapons of mass destruction'-Emanuel answered yes. (He didn't take office until after the vote.) 'I still believe that getting rid of Saddam Hussein was the right thing to do, okay?' he added."3

When Jack Murtha made his proposal for withdrawal from Iraq, Emanuel quickly declared that "Jack Murtha went out and spoke for Jack Murtha." As for Iraq policy, Emanuel added: "At the right time, we will have a position." That was November, 2005. In June, 2006, it was obviously time, and Emanuel finally revealed his policy in a statement on the floor of the House during debate over Iraq, thus: "The debate today is about whether the American people want to stay the course with an administration and a Congress that has walked away from its obligations or pursue a real strategy for success in the war on terror. We cannot achieve the end of victory and continue to sit and watch, stand pat, stay put, status quo and that is the Republican policy. Democrats are determined to take the fight to the enemy." The refrain is familiar; more troops are the means and victory in Iraq is the goal.

The war on Iraq benefited Israel by laying waste a country seen to be one of its major adversaries. Emanuel's commitment to Israel 4 and his Congressional service to it are not in doubt. The most recent evidence was his attack on the U.S. puppet Prime Minister of Iraq, Nouri al Maliki, because Maliki had labeled Israel's attack on Lebanon as an act of "aggression." Emanuel called on Maliki to cancel his address to Congress; and he was joined by his close friend and DSCC counterpart, Sen. Chuck Schumer, who asked; "Which side is he (Maliki) on when it comes to the war on terror?" In terms of retired Senator Fritz Holling's statement that Congress is Israeli occupied territory, Rahm Emanuel must be considered one of the occupying troops. And he certainly is a major cog in the Israel Lobby as defined by Mearsheimer and Walt. Nor is the idea that the Lobby exists and has tremendous influence on Middle East policy any longer a taboo in the minds of the general populace. According to a poll just carried out by Zogby International for CNI 5, 39% of the American public "agree" or "somewhat agree" that "the work of the Israel lobby on Congress and the Bush administration has been a key factor for going to war in Iraq and now confronting Iran." A similar number, 40%, "strongly disagreed" or "somewhat disagreed" with this position. Some 20% of the public were not sure.

But in some respects, Emanuel is a mysterious fellow, as evidenced by his biography, which is readily available on Wikipedia and in the piece in Fortune (3). But there are a few things missing or not fully explained. First, as is often pointed out, Emanuel's physician father was an Israeli èmigrè; but, according to Leon Hadar, he also worked during the 1940s with the notorious Irgun, which was labeled as a terrorist organization by the British authorities.6 Perhaps Rahm's current interest in terrorism was first kindled at his father's Irgun knee.

Second, during the 1991 Gulf War, Emanuel was a civilian volunteer in Israel, "rust-proofing brakes on an army base in northern Israel." (Wikipedia, New Republic). This is peculiar on two counts. Here the U.S. goes to war with Iraq, but Emanuel, a U.S. citizen, volunteers not for his country, but for Israel. Moreover, here is a well-connected Illinois political figure with a father who had been in the Irgun, but he is assigned to "rust-proof brakes" on "an army base." Maybe.

Third, immediately upon his return from his desert sojourn, Emanuel at once became a major figure in the Clinton campaign "who wowed the team from the start, opening a spigot on needed campaign funds."(3) How did he do that after being isolated overseas, and with no experience in national politics? Fourth, after leaving the Clinton White House, he decided that he needed some accumulated wealth and "security" if he were to stay in politics. So he went to work for Bruce Wasserstein, a major Democratic donor and Wall Street financier.

According to Easton, "Over a 2 1/2-year period he helped broker deals-often using political connections-for Wasserstein Perella. According to congressional financial disclosures, he earned more than $18 million during that period. His deals included Unicom's merger with Peco Energy and venture fund GTCR Golder Rauner's purchase of SBC subsidiary SecurityLink. But friends say his compensation also benefited from two sales of the Wasserstein firm itself, first to Dresdner Bank and then to Allianz AG." Again for a newcomer to haul in $18 million in two years is almost miraculous. How did he do it? Next Emanuel won a seat in Congress in 2002, and by 2006 he was chair of the DCCC. Another near miraculous rise.

But Emanuel and his fellow hawks may yet fail to get their way. Major figures among the rulers of U.S. empire, and their well-compensated advisors, from James Baker to Jimmy Carter to Zbigniew Brzezinski to Mearsheimer and Walt, see disaster looming unless the neocons of both War Parties with their dual loyalties to the U.S. and Israel are brought to heel. Second and more important, the people are fed up with the war on Iraq and wary of other wars the hawks like Emanuel have planned for us. The politicians who win office, whether Rove's Republicans or Emanuel's Democrats, will have to deal with this rising tide of anger or risk losing their sinecures. That risk is offset by the machinations of Emanuel and others to guarantee that there is no genuine opposition party or movement. And that lack of a real opposition is a problem we must solve.