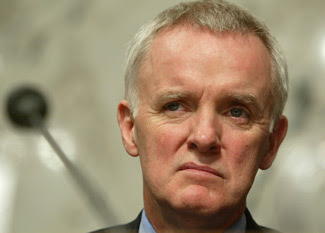 NEW YORK (AP) — Dissent is woven deep into the fabric of the New School, a left-leaning university that was founded as a freethinking experiment and became a haven for intellectuals fleeing persecution in Hitler's Germany.

But things have taken a nasty turn this month as professors and students have publicly blasted university president and Democratic Party maverick Bob Kerrey for what they call chaotic management.

The tumult has drawn attention to this proudly unconventional Greenwich Village institution. An account of tomato-throwing protesters chasing Kerrey down Fifth Avenue turned up on The New York Times' Web site, and even the Socialist Worker newspaper has chronicled the strife.

For his part, Kerrey — who has the crucial backing of trustees — is taking the tumult in stride, while pledging to give students and faculty more input in some school decisions.

After all, "the New School has a long history of supporting dialogue and dissent," the former Nebraska governor, senator and presidential candidate wrote in his blog Wednesday.

The private university has more than 9,800 degree-seeking students in programs ranging from public policy to performing arts, including the acclaimed Parsons design school. Established in 1919, the New School became a bastion of liberal social theory and a Nazi-era refuge for European thinkers such as political theorist Hannah Arendt and anthropologist Claude Levi-Strauss.

Kerrey became its president in 2001. A colorful figure in his own right, he once dated actress Debra Winger and briefly flirted with running for New York mayor in 2005, saying he was "just crazy enough" to do it.

His lack of a doctoral degree raised some professors' hackles, and his support for overthrowing Iraqi dictator Saddam Hussein spurred a bitter 2002 debate with students. Some students and faculty members were aghast after Kerrey, a decorated Vietnam War veteran who lost part of his right leg in combat, acknowledged in 2001 that his SEAL team had killed women and children during a 1969 firefight in the Mekong Delta.

During Kerrey's tenure, the full-time faculty has doubled, enrollment has swelled 38 percent in degree programs and the school has started planning an ambitious expansion.

The faculty revolt stems from claims that academic planning has been chaotic, with five provosts, or chief academic officers, in seven years. After the latest provost abruptly left — and Kerrey temporarily put himself in the post — full-time faculty members overwhelmingly expressed no confidence in Kerrey's leadership in a series of votes in the last 10 days.

"If Bob Kerrey were the chairman of a corporation and had churned through five people who reported directly to him, that would, prima facie, be evidence of mismanagement," faculty senate co-chairman and politics professor Jim Miller said. Still, the faculty did not expressly call for the president's departure.

Then about 75 students took over the cafeteria Wednesday night to underscore their own list of demands, including the resignations of Kerrey, a vice president and the trustee chairman. A 26-year-old was arrested on disorderly conduct charges during a standoff that at times spilled onto the sidewalk, police said. The person's name and court status was not immediately available.

Students refused to talk directly with Kerrey but eventually negotiated an agreement including a say in the selection of the next provost and no university-initiated criminal or disciplinary charges against the protesters, according to participants and the school.

"We believe that the agreement reached is reasonable and will improve the shared governance of our university," Kerrey said in a statement Friday. He agreed earlier to find someone else to serve as interim provost.

"We hope that both getting the demands and causing this problem that we did will do that," said Blumenfeld, 27.

Student and faculty uprisings are largely symbolic at American colleges; the power to fire presidents generally rests with trustees. But such unrest can complicate and even shorten presidents' tenures, said Donald Hossler, an Indiana University education professor who specializes in higher education issues.

Navigating campus turmoil may simply be part of Kerrey's job. As sophomore writing student Sam Dwyer observed, "Kerrey has the unenviable position of being an authority figure at an institution that spends much of its time investigating the nature of authority."