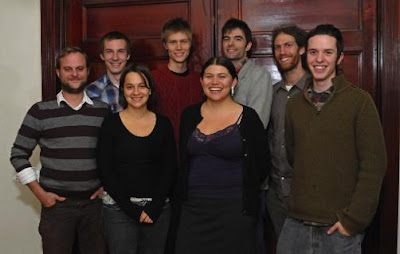 The RNC Eight have been charged with criminal conspiracy “in furtherance of terrorism,” accused of attempting to provoke a riot and prevent the Republican National Convention from taking place. They deny the accusations. They provided this photo showing, from left, Rob Czernik, 24; Erik Oseland, 21; Monica Bicking, 23; Eryn Trimmer, 23; Luce Guillen-Givins,24; Garrett Fitzgerald, 25; Nathanael Secor, 26, and Max Specktor, 19.

A deputy sheriff and two others infiltrated the RNC Welcoming Committee before GOP convention.

She introduced herself as Norma Jean.

Asked by a man at the Jack Pine Center why she was there, she said she had issues with President Bush and the Iraq war. "I told him I was interested in helping the cause and interested in participating in the protesting," she later wrote in reports reviewed by the Star Tribune.

What she did not tell him is that she was a deputy sheriff for the Ramsey County Sheriff's Office. Along with two other undercover sheriff's operatives and an FBI informer, she had been assigned to infiltrate the RNC Welcoming Committee, which was planning street blockades at the 2008 Republican National Convention.

She went "dumpster diving" at the group's instructions to find food for the anarchists to eat. She cooked meals for some meetings, ran errands, coordinated committee discussions and represented the organization at some gatherings of the protest movement. She became friends of some of the activists. And she, ironically, even helped on security for the anarchists, who worried that the cops were infiltrating them.

For a year Deputy Hedstrom led a double life as Norma Jean Johnson, filing her recollections, often daily, with the Special Investigations Unit, as did the other operatives. The covert operation was not without drama. When one informant was accused of being a cop, he broke into tears, convincing his accusers that they were mistaken, according to a report.

"Their function was critical to the success of the investigation," said Ramsey County Sheriff Robert Fletcher. "These are difficult roles. You need to be a good actor."

Recalling demonstrations that paralyzed Seattle in 1999 during World Trade Organization meetings, local and federal authorities have been more aggressive in the past decade in gearing up for major protests, especially those where anarchists may intervene. There were big investigations before the 2004 Republican National Convention in New York City.

Eight members of the RNC Welcoming Committee were arrested and are awaiting trial on charges of conspiracy to commit second-degree riot. They are accused of plotting to shut down the convention by blockading roads. They're also accused of planning criminal damage to property, including use of incendiary devices.

Fletcher said many allegations are based on reports from the undercover personnel.

Robert Kolstad, attorney for one of the eight, said much of the evidence is based on hyperbolic comments made by Welcoming Committee members that had little to do with their intentions. "Despite the rhetoric, there was never reasonable expectation by anyone to shut down the convention," he said.

Members of the RNC Eight have announced plans to hold a news conference Tuesday to criticize Ramsey County Attorney Susan Gaertner, whose office is prosecuting the case.

The Star Tribune reviewed 1,000 pages of reports by the three who spied for the sheriff. The reports were obtained by a source with access to the documents. The newspaper has not seen most of the reports from an FBI informer who Fletcher says provided "the best information." Fletcher, who did not provide the newspaper with any reports by the undercover operatives, also declined to allow interviews with the three from his office.

Following department procedures, he said his office surveyed public documents and the Internet in August 2007, concluding that the Welcoming Committee might be planning criminal activity. He then authorized a "limited investigation" allowing his operatives to attend public meetings.

Based on what they and the FBI informer found, a full investigation was launched, allowing undercover agents to attend private meetings and participate in the group so long as they did not suggest criminal activities, he said.

The sheriff's investigation cost about $300,000, Fletcher said. He's asking the city of St. Paul to reimburse his office from $50 million in federal funds for convention security.

Hedstrom, a narcotics officer, was partnered with Rachel Nieting, a guard in the county jail. Nieting, in her 20s, posed as Amanda, Hedstrom's niece. A third operative, Chris Dugger, was a confidential paid informant who has since become a jail guard and has taken tests to become a deputy.

Nieting, now a deputy, halted her undercover work after a few months. Fletcher said she "didn't have the level of acceptance that Marilyn had." Hedstrom told an anarchist that Amanda dropped out after finding a new boyfriend.

Most of the anarchists were decades younger than Hedstrom, but Fletcher said that posed no problem. "We're not always looking for a person that seems to fit perfectly," he said. "Someone that is not an obvious fit ... is least likely to be suspected." Also, he said, pairing Hedstrom and Nieting increased their safety.

Hedstrom settled into her covert role.

"Norma Jean looked like somebody's mom," recalls Meredith Aby, a member of the Anti-War Committee, a group that occasionally met with the anarchists. "She was treated by the Welcoming Committee as if she were one of their own."

Betsy Raasch-Gilman, 56, who helped raise money with Hedstrom on the Welcoming Committee, said they sometimes discussed family and grandchildren. "To this day, I don't know how much was put-on and how much was real," she said. Raasch-Gilman learned that Hedstrom was undercover after court documents were filed. "I wonder how she lives with her conscience," she said of Hedstrom. "She knows the truth of the matter. We were not conspiring to riot."

Nathanael Secor, one of the RNC Eight, said "a level of comradeship" developed between activists and the operatives and it was disappointing to learn they were spies. Still, he says, "We had the feeling we were under surveillance from the beginning. It did not come as a complete shock."

While Hedstrom blended in, Dugger gave off different vibes and was often under a cloud of suspicion. In his late 20s, he was "kind of muscular," had tattoos and looked like a biker, says Katrina Plotz, a member of the Anti-War Committee.

At one meeting of various groups, "somebody made a joke that based on looks, he's the one who looks like a cop," Plotz said. "He kind of smiled and didn't say anything."

At a meeting where Hedstrom was the facilitator, a kind of chairperson, an anarchist expressed concern that he was a cop, a report said. Dugger "became emotional and told them how bad he felt, he wiped his eyes and blew his nose." He denied he was an informer.

The memo said two anarchists told him they "don't think he is a cop. They said a cop would have just walked away and never returned and wouldn't cry."

Dugger even got into the act. By August he was urging an anarchist to suspect another anarchist of being an informer.

In the reports, the anarchists talk with bravado, with occasional references to breaking windows and damaging vehicles. They told each other it was not violence, since they had no plans to injure people.

Many meetings involved no talk of property damage, or even protests. They dealt with tasks like finding places to stay. The local anarchist core was small, and the reports offer a glimpse into strains --and even gripes -- among them.

Nieting wrote that she and Hedstrom were the only two women to join Karen Redleaf at a "women's Welcoming Committee" meeting. Redleaf, a committee member, talked about how disconnected she felt and was only coming to Sunday meetings because Norma Jean was there.

Redleaf, who has not been charged, declined to comment, but Peter Erlinder, her attorney, said she did not know Hedstrom and Nieting were undercover operatives.

The agents described how subgroups planned a decentralized disruption of St. Paul, choosing sectors for blockades and confrontation. There are references to a committee called the "action faction," where there were more discussions about blockades. Fletcher said his operatives did not get inside the faction but the FBI informer did. There were references to using "chains and locks for locking up downtown business doors."

Former Minneapolis Police Chief Tony Bouza praised the covert investigation. "It was a classic case of an effective police operation against a criminal conspiracy. ... They targeted the right groups," said Bouza, author of "Police Intelligence," a book on undercover police work.

But David Cunningham, a professor at Brandeis University in Massachusetts, says that while authorities may have had probable cause to infiltrate anarchist groups, he is concerned about a potential chill on civil liberties.

Cunningham, author of "There's Something Happening Here," a history of covert FBI activities in the 1960s and '70s, said there needs to be more oversight of undercover work from Congress. He also believes local law enforcement agencies should be required to obtain court approval for undercover operations.