At the Movies - Telling the Holocaust Like It Wasn’t/Review of "Imaginary Witness: Hollywood and the Holocaust" 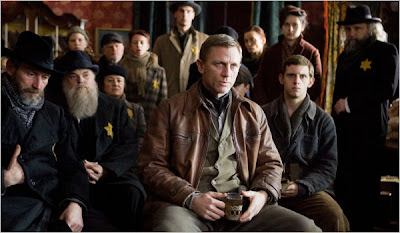 Toward the end of the new film about postwar Germany The Reader, a Holocaust survivor in New York curtly instructs a visiting German lawyer named Michael Berg that he would do well to remember that the camps were neither a form of therapy nor a university. “Nothing,” she says, “came out of the camps. Nothing.”

With Holocaust Memorial Day to be observed on Jan. 27, it’s a timely admonition. It’s not, however, one that either The Reader or a host of memoirs or films about the Third Reich appear to be heeding. Rather, the further the Holocaust recedes into the past, the more it’s being exploited to create a narrative of redemption.

For a start, a spate of Holocaust memoirs about the authors’ childhoods turned out to be fraudulent, including Benjamin Wilkomirski’s, Misha Defonseca’s, and, most recently, that of Herman Rosenblat, whose Angel at the Fence was touted by Oprah Winfrey as the ultimate love story.

Perhaps the most striking development, however, has been the recent profusion of films about the Third Reich, which tend to infantilize the Holocaust. In The Reader, the lovely, middle-aged former SS concentration camp guard Hanna Schmitz seduces the 15-year-old Michael Berg in 1958, only to disappear suddenly after their summer-long tryst. Berg next encounters her at a war crimes trial for several female camp guards that his law school seminar is attending.

Ultimately, though, the film blurs the distinction between victim and perpetrator. The judge is unable to respond convincingly when Schmitz asks him how he would have responded to orders from above. Schmitz herself comes across simply as an unthinking tool of the Nazi regime rather than a fervent anti-Semite.

Similarly, the British production The Boy in the Striped Pajamas distorts the relationship between victim and murderer. It is an escapist fantasy about a friendship between two little boys, one of whom is trapped in “the farm” with its smokestacks, the other the son of the Nazi commandant.

If these films attenuate the difference between victim and perpetrator, Edward Zwick’s Defiance might seem to be the reverse. By choosing Daniel Craig to play the Jewish partisan commander Tuvia Bielski, complete with white horse, Mr. Zwick turns resistance to the Nazis into an action film, an emotionally glorious moment. As rousing as this vision of Jewish combat may be, it does raise a problem identified by the historian Raul Hilberg in his memoir The Politics of Memory.

According to Mr. Hilberg, “when relatively isolated or episodic acts of resistance are represented as typical, a basic characteristic of the German measures is obscured ... the drastic actuality of a relentless killing of men, women and children is mentally transformed into a more familiar picture of a struggle — however unequal — between combatants.” ... 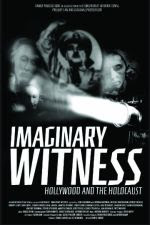 The Movie: Hollywood is, of course, Ground Zero for glamour, glitz and artificiality. All of which makes for inconceivable incompatibility when thrust up against the unimaginable horrors of that most real evil of the 20th century, the Holocaust. Imaginary Witness is an unusually intelligent examination of Hollywood's sometimes not so noble relationship with portraying the terrors of the Nazi regime from the earliest films of the 1930s which haltingly acknowledged the growing threat of Hitler's order to what I guess you could call the halcyon days of such films as Schindler's List, some sixty years later.

Originally produced for and aired on American Movie Classics, Imaginary Witness takes a more or less chronological look at the way the Holocaust has been portrayed by Hollywood, not only in feature films, but also in such associated fare as newsreels. In fact in one of the more bizarre clips featured (aside, perhaps, from a brief snippet of Laurel and Hardy actually speaking in German) is an early 30s newsreel showing Nazi Youth book burning parties, which the reel chalks up to youthful hi-jinks with an almost carefree air.

Once the documentary moves into the late 1930s and the first feature films to actually address the growing Nazi menace, like Confessions of a Nazi Spy from 1939, the tone of the piece grows substantially darker, as might be expected. It may also be surprising to some viewers to hear that it was Warner Brothers which actually was the most active at the beginning of this trend. While most, if not all, of the major studios were headed by Eastern European immigrant Jews, all of the honchos were of the "assimilate first" variety and didn't want to be seen as espousing a uniquely Jewish point of view. This led them, incredibly, to uniform caving when Germany insisted that Jewish employees of the companies in Germany be fired. If you find yourselves disgusted by our current Congress, wait until you get a load of the mid- to late-30s version decrying Jews, including Hollywood executives, as being more dangerous to America than Hitler.

While Hollywood treated Nazism with kid gloves for the first few years of World War II, once Japan attacked Pearl Harbor in December 1941, the gloves came off, to a degree at least. The next four years saw a slew of anti-German films, the most incisive of which were, strangely, B-films which slipped under the door of the Hayes Office, so to speak, and were able to portray the more virulent aspects of the Nazis' attempts to rid the world of Jews. It's fascinating in this regard to see at least short segments from such lesser known films as None Shall Escape, one of the first mid-40s features to presciently predict that a lot of Nazi officers were going to be ultimately tried as war criminals. Contrast the relative grittiness of that film with the slickness of The Mortal Storm, which sought to portray anti-Semitism without ever utilizing the word "Jew."

Once the war ended, perhaps the world as a whole needed some relief, and the horrors of the Holocaust were not made explicit in any post-war films, despite being tangentially related to such fare as Gentleman's Agreement. In fact Imaginary Witness makes a compelling case that the not so subtle anti-Semitism that bubbled up in government in the 1930s simply took on a new mask with such 1950s stalwarts as the House Un-American Activities Committee, which, whatever its real intent, managed to stifle any real Jewish content in film for most of the decade. It wasn't until The Diary of Anne Frank in 1959 that the subject was examined again, albeit from a curiously non-ethnic viewpoint and with only one dream scene directly acknowledging Anne's ultimate fate.

The 1960s saw some important films, most notably The Pawnbroker, which sought to portray the inner life of Holocaust survivors. Also well detailed in Imaginary Witness is Judgment at Nuremberg in both its original television and ultimate film incarnations. I was previously unfamiliar with the television version's censored soundtrack, due to the sponsorship of Natural Gas, who didn't want any mention of gas as a killing method. (Slightly tangentially, I was a little surprised not to see at least a passing mention of Return from the Ashes, perhaps not really a Holocaust-themed film, but one which, despite its mystery and thriller elements, relies on the Holocaust for several major plot points).

The 1970s through the 1990s saw the greatest explosion of Holocaust material being presented to the viewing public, including on the small screen, courtesy of such landmark productions as Holocaust (which actually changed some laws in Germany vis a vis statute of limitations on war crimes) and War and Remembrance, which completely pushed the envelope on what could be portrayed on television. Everything built, of course, to Steven Spielberg's monumental Schindler's List, which has both its champions and detractors, both of whom are featured in this piece.

Imaginary Witness does an excellent job of presenting not only an incredibly panoply of film clips, but also some cogent commentary from such filmmakers as Spielberg and Vincent Sherman, to various survivors (both in and out of the film industry), and various more self-important and thus less compelling people like a foppish Rod Steiger, who instead of talking about the emotional impact of The Pawnbroker, instead goes off on his actorly technique (masterful, of course, according to him) in the final scene of the film.

The documentary makes no bones about film as an art form never being able to adequately portray the pure evil of the Holocaust. Imaginary Witness nonetheless does a great service by affording a level-headed and non-exploitative review of Hollywood's response to one of the greatest human dramas of all time.

Sound: The standard stereo soundtrack is comprised entirely of Gene Hackman's narration, interviews, and film soundtracks, almost all of which contains dialogue segments. Hackman's narration is strangely compressed at times, especially in the opening few minutes. Nothing is horrible here, but there's not a lot of range. No subtitles are available.

Extras: None are offered.

Final Thoughts: Imaginary Witness is an unusually thought-provoking piece that helps to give some historical context to Hollywood's response to the Holocaust. The story is not always easy to watch, for any number of reasons, but it's part and parcel of one of the greatest tragedies ever visited upon mankind and should be seen by anyone interested in calmly analyzing how popular culture attempts to respond to such overwhelming evil. Highly recommended.