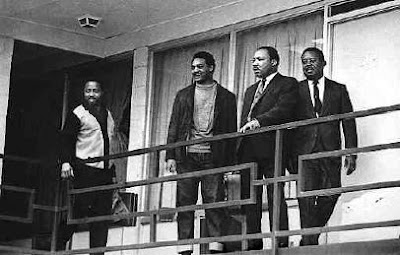 The most surprising thing about Eyewitness to Murder: The King Assassination (9 p.m. on CNN) -- kicking off the hard-hitting doc series Black In America -- is how many of Martin Luther King's contemporaries are still alive and kicking 40 years after his death at the hands of a petty crook named James Earl Ray.

The second most surprising thing is how much lingering dissension there is about who actually murdered the determined Baptist minister who famously intoned, "I have a dream!''

And the third thing, his aging associates admit candidly, is that King knew he was going to die.

He knew the civil rights cause he championed in 1955 -- fearlessly, with a non-violent directive -- had incensed Southern racists and put him squarely in rifle range of every redneck nutbar who wanted the revolution cut off at its knees.

And he knew that if assassins could get to president John F. Kennedy, as they had five years earlier, there was no way he was going to be protected.

"His non-violent protests brought out the worst in white America,'' narrator Soledad O'Brien informs -- and in 1968, when equal rights for minorities was still a debatable issue, the worst was pretty bad indeed.

And so -- inevitably, perhaps -- King died April 4, 1968 -- 40 years ago -- when he was shot on the second floor balcony of the Lorraine Motel in Memphis while conversing with aides about a meeting in support of striking black sanitation workers.

But as with most political deaths that martyr their victims, doubts remain over who pulled the trigger.

Neither did King's family, who met with the convicted killer in '97 -- a year before his death -- and backed efforts to secure him a new trial.

It never happened, and a decade later, rumours of a conspiracy involving the FBI, mafia, federal politicians and a mysterious gunrunner named Raoul continue unabated.

Of one thing, however, there can be no doubt: King's death, along with JFK and presidential hopeful Robert Kennedy a mere two months later were a triptych of destruction that turned the earnest idealism of the '60s from a purple haze pipe dream into a crimson-coated nightmare.

"I felt with the assassinations of Dr. King and Robert Kennedy, something had died in all of us,'' insists John Lewis, a civil rights pioneer and current U.S. congressman.

At this point he breaks down on camera, his grief palpable -- which lends poignancy, and a touch of sadness, to this otherwise brisk rundown of King's final days.

It's like this with a lot of Old School warriors, reliving what is clearly the most painful moment in their lives with a mix of irony, angst and grim resignation.

But as Lewis, for one, knows, King's story isn't over yet, and if there's a legacy to his life and work, it's currently seeing the light of day in presidential hopeful Barack Obama, poised to overtake Hillary Clinton as the Democratic candidate of choice for those who once believed, as King did, that a change is gonna come.

"Something is happening in America and people are prepared to make that great leap,'' Lewis explained, shifting his superdelegate vote from Clinton to Obama a few weeks ago. "The candidacy of Sen. Obama represents the beginning of a new movement in American political history!"

If true, it may make reminiscences of King's death a little less painful when the next anniversary rolls around.

Seems to me that the real untruth around the killing of Dr. King is not so much the name of the specific triggerman, but the fact that whatever his or her name, the killer was no regular citizen, but a dog belonging to Imperial court players.

Truth is, the American people (and most other people, too) are generally ready to stand and listen to dissenting voices like Dr. King's without opening fire at random.

Killings like King's, or Lennon's, are used not only to dispose of threats to Imperial order and further the plans of the big boys, but to discourage other dissenters from voicing disagreement or seeking redress from legitimate grievances.

New modes of power are needed - our structures are autumnal and crumbling. Renewal must be accompanied by exposure of the painful darknesses we are clenched around as a culture.