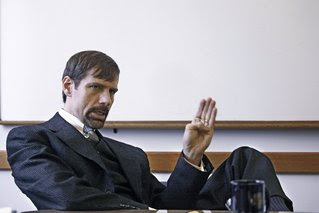 The salacious charges against Nicholas – made public in two federal grand jury indictments unsealed last Thursday – allege a pattern of criminal behavior by one of the state's richest people and biggest political donors.

Nicholas, the 48-year-old co-founder of Broadcom, a computer chip-making company, has donated more than $9.4 million to various California candidates and causes in the past four years. He is a top donor to Gov. Arnold Schwarzenegger.

This year, the indicted Republican billionaire is the financial force behind two crime initiatives voters will consider in November – one to stiffen anti-gang statutes and another to bolster victims' rights. Combined, he has given the measures $5.9 million – critical seed money used to collect signatures to qualify for the ballot.

Proponents are furiously backpedaling away from Nicholas' involvement – even though he is the largest donor to both campaigns.

Some Democrats are demanding the campaigns return all his "tainted" money.

"Anything less than that is pure hypocrisy that voters will see through," said Sen. Gloria Romero, chair of the Senate Public Safety Committee and a Los Angeles Democrat.

In the first indictment, Nicholas and another Broadcom executive are accused of illegally backdating millions of stock options. The company was forced to correct its books by $2.2 billion in what is believed to be the largest-ever accounting adjustment over stock options.

"He is confident that he will be fully vindicated," Sullivan said. An arraignment hearing is set for June 16. Nicholas is free on $3 million-plus bail.

The second indictment charges Nicholas with drug and prostitution use and describes efforts to conceal his transgressions.

At parties and business meetings, Nicholas supplied associates – both knowingly and not – with marijuana, ecstasy, cocaine and methamphetamine, the indictment alleges. It says he referred to the illicit drugs as "refreshments" and "party favors" in invoices.

In 2001, Nicholas and his associates smoked so much marijuana on a flight from Orange County to Las Vegas that "the pilot flying the plane put on an oxygen mask," according to the indictment.

In June 2002, prosecutors say Nicholas tried to buy the silence of one Broadcom employee, paying $1 million to conceal his "unlawful narcotics activities." He also allegedly "used threats of physical violence and death" to hide his drug activities.

Romero said she was "disgusted" such a man could use his wealth to rewrite California's crime laws.

"Let's be sure that the people who stand up and say, 'Let's be tough on crime' are not themselves the people who imperil us and make unsafe our own neighborhoods," she said.

Nicholas fueled his political giving from his years at Broadcom. From 1991 to 2003, he nurtured the Irvine-based chip-making company into one of the world's largest tech corporations. Broadcom-made chips can now be found in computers, cell phones, iPods and the Nintendo Wii systems.

In 2007, Forbes magazine ranked Nicholas, with an estimated net worth of $2.3 billion, 195th on its list of the richest Americans.

Nicholas, who lost his sister to a violent murder in 1983, has leveraged his wealth in several crime-related ballot campaigns.

In 2004, he funded a last-minute push to defeat Proposition 66, a proposal to amend California's "three-strikes" law.

Nicholas gave $1.5 million to Schwarzenegger's political committee in 2004 to fund anti-66 television ads. He contributed another $150,000 to the governor's committee this April.

Asked whether the governor will return Nicholas' money, Schwarzenegger spokeswoman Julie Soderlund said, "We will allow (the legal process) to run its course and make a decision based on the outcome."

In 2006, Nicholas donated $157,000 to Jessica's Law, which imposed new restrictions on convicted sex offenders. Nicholas was the measure's second-largest donor.

This year, Nicholas is most closely tied to "Marsy's Law," which would expand the rights of crime victims and make it harder for convicts to obtain parole.

Nicholas wrote the measure, named it after his sister, and contributed all but $100 of the measure's $4.85 million treasury.

The campaign announced Monday Nicholas would no longer be involved.

"I must devote all my energy to my own legal matters," Nicholas said in a prepared statement.

Mitch Zak, a campaign spokesman, sought to further distance the campaign from Nicholas, saying proponents have dissolved the old committee and formed a new one. He said they do not plan to spend the roughly $2 million remaining in unspent Nicholas donations.

"The public policy is vitally important and not in any way, shape, or form related to any individual's private life," Zak said.

Nicholas urged the campaign to continue without him, calling the measure "an important reform to ensure the rights of crime victims."

Both the old and new Marsy's Law campaign will be managed by Assemblyman Todd Spitzer, R-Orange, who declined to comment.

The second Nicholas-backed initiative, the Safe Neighborhoods Act, would stiffen penalties for gang members and increase law enforcement funding in the state.

Sen. Runner said while he was "surprised" and "disappointed" by the allegations, they would not refund Nicholas' money. "Those dollars are out the door," he said.

Instead, he accused the measure's opponents of playing politics with the indictment.

"This is just their newest way to undermine an initiative that they never supported," he said.

A lawyer for the Broadcom co-founder denies the allegations.

Nicholas lawsuit: An article Wednesday in Business about Broadcom co-founder Henry T. Nicholas III quoted attorney Joseph Kar as saying his client, Kenji Kato, was unfamiliar with allegations in court papers against Nicholas by contractor Roman James but knew of the court case because "Nicholas had mentioned it infrequently." Kar said Nicholas mentioned James infrequently, not the case.

But there was more, according to a claim made in court documents: plans for a "secret and convenient lair" with hidden entries for Nicholas to indulge his "manic obsession with prostitutes" and "addiction to cocaine and Ecstasy." ...