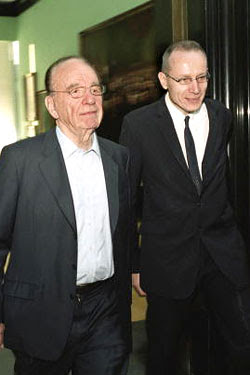 Caveat: This is a puff piece from Gawker.com - a politically retrograde web site that is impressed with celebrity above all else, and never fails to miss the point:

" ... Thomson, unlike any other candidate, can actually think like Murdoch, and has already earned his trust, even his affection. ... The News Corp. chairman is clearly in no mood to slow or compromise his vision for the Journal ... "

Good grief ... What's missing here? Murdoch's CIA, heroin-smuggling history in Australia, Thomson's past as a Mockingbird propagandist at The Financial Times, his marriage to the daughter of a Chinese general in the People's Liberation Army, the insidious fascist propaganda of the Journal's editorial pages, the Murdoch empire's cover ups of CIA murders and coup plots, etc., etc., etc. BTW, Thomson is now publisher of the WSJ, and will be "executing Murdoch's plans" like a good soldier (in RM's ongoing war against our minds).

Why It Has To Be Thomson Atop The Journal

A search is expected to begin soon for Marcus Brauchli's successor atop the Wall Street Journal newsroom, but there's no need to look far: It has to be Robert Thomson, the Journal's publisher and Rupert Murdoch's resident lieutenant. Murdoch already tried and failed once to placate the institutional culture at the Journal, and this time around he's going to want someone who fully supports his plans and can execute them quickly.

Fellow Australian Thomson, who worked for Murdoch for five years at the Times of London, has a close relationship with the media mogul, but also possesses a broader charm that could help him retain key Journal staff.

"Robert has a way of getting his way while being emollient," a former colleague said. "He is what Murdoch wants and if Murdoch asks, Murdoch gets. He was kind of doing the job anyway."

Indeed, Thomson "has come to be seen in the [WSJ] newsroom as a supereditor, looking over Mr. Brauchli’s shoulder," according to the Times. Despite his publisher title, Thomson's newsroom role is extensive enough that he is poised to run the paper as interim managing editor while a formal seach is conducted, according to a report in the Journal.

When Thomson was the North America editor at the Financial Times, "he was a bit of a social hit," despite a hunched appearance due to a bad back, another former colleague said. "Thomson is very charming."

Thomson's charm was also mentioned in a December profile in the Canberra Times, along with the editor's friendship with Murdoch:

"He's kind and thoughtful, keeps in touch with old friends (even those who aren't heavy hitters) and dutifully visits his mum in Melbourne's St Kilda once a year, with wife and kids in tow."

But there are other holidays too. Thomson and his wife, Wang Ping, and their two small sons, Jack and Luke, have holidayed with Murdoch and Wendi Deng and their small two daughters, Grace and Chloe, at the Murdoch ranch in California. Murdoch likes Thomson's lack of conventionality; and the Australian connection cements the closeness. Observers say the pair, born 30 years apart on the same day in March, are closer than a regular tough employer/successful employee relationship.

Not that Thomson is all gladhanding. At the Financial Times, he was famous for being able to pull together big global reports, like the story of the Sumitomo Corp. employee who lost billions of dollars in the copper market, and get credit for doing so.

Said the Canberra Times profile: "One reporter who worked closely with him said that for all his respect for the past, he had a sense of the mischievous and the ticklish and was brilliant in his handling of all aspects of news, from the banality of real estate through to the complexity of reporting China."

There is, of course, a small pool of other possibilities for the Journal job, like WSJ vet Larry Ingrassia at the Times or Chrystia Freeland at the U.S. edition of FT. Perhaps Journal alum Stephen Adler at Business Week, maybe even, as a longshot bet, Times columnist Joe Nocera. Or Murdoch could really stir things up with his staff and reach out to a non-financial editor, advancing his plan to inject more political and international coverage into the front of the paper.

But why bother? Thomson, unlike any other candidate, can actually think like Murdoch, and has already earned his trust, even his affection. These are key advantages at a time when the News Corp. chairman is clearly in no mood to slow or compromise his vision for the Journal. Assuming Murdoch can push his changes through the special committee overseeing the newspaper's editorial side — a significant consideration — Thomson is the only real choice.

THOMSON: According to the Canberra Times, he "visits his mum in Melbourne's St. Kilda once a year, with wife and kids in tow."
MURDOCH: Frequently heads home to Melbourne to visit his mum, Dame Elisabeth Murdoch — most recently for her 99th birthday on February 8.

THOMSON: Co-author of The Chinese Army: An Illustrated History From The Long March to Tiananmen Square.
MURDOCH: Took BBC News off his Chinese TV network.

THOMSON: Leather jackets when younger; retro, quasi-new-wave skinny ties today.
MURDOCH: No tie ever since Wendi, 38 years his junior, gave him a makeover.

THOMSON: Shrunk Times of London from broadsheet to tabloid.
MURDOCH: Shrunk New York Post cover price from 50 cents to a quarter in attempt to drive Daily News into the ground.

THOMSON: "There is a larger degree of energy and inventiveness among British newspapers, and a certain smugness and self-defeating self-satisfaction among too many U.S. newspapers."
MURDOCH: "I'm Rupert Murdoch, the billionaire tyrant." [Murdoch playing himself on The Simpsons].

THOMSON: Threw his "good friend" (according to a Journal flack) Marcus Brauchli overboard at the WSJ at Rupert's behest.
MURDOCH: From Clay Felker to Harry Evans to Hillary Clinton — and possibly even with his own son, Lachlan — he's loyal till it makes more sense for him not to be.

http://nymag.com/daily/intel/2008/04/rupert_murdoch_and_robert_thom.html
Posted by Alex Constantine at 11:06 AM