Suggestion: Tax revenue would be better spent on the cognitive infiltration of Harvard University. The ranking Ivy League institution offers no course on the history of fascism and its corporate roots - because students would quickly come to realize that they live in a fascist state, that their basic beliefs about themselves and their country are cooked public relations concepts. The cognitive infiltration of Harvard is necessary to correct this perceptual imbalance and introduce lackluster academic minds like Prof. Sunstein's to actual reality, a place where fascism is inherently conspiratorial and not a "theory." Students exposed to the cognitive infiltration of reality at Harvard will recognize that Prof. Sunstein is an enabler of fascism whose counter-Constitutional proposals have underpinnings of intellectual quackery and state propaganda. - AC 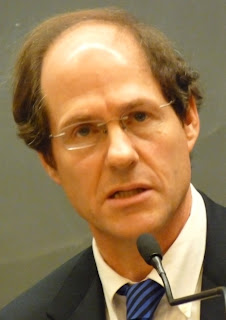 In a 2008 academic paper, President Barack Obama's appointee to head the Office of Information and Regulatory Affairs advocated "cognitive infiltration" of groups that advocate "conspiracy theories" like the ones surrounding 9/11.

Cass Sunstein, a Harvard law professor, co-wrote an academic article entitled "Conspiracy Theories: Causes and Cures," in which he argued that the government should stealthily infiltrate groups that pose alternative theories on historical events via "chat rooms, online social networks, or even real-space groups and attempt to undermine" those groups.

As head of the Office of Information and Regulatory Affairs, Sunstein is in charge of "overseeing policies relating to privacy, information quality, and statistical programs," according to the White House Web site.

Sunstein's article, published in the Journal of Political Philosphy in 2008 and recently uncovered by blogger Marc Estrin, states that "our primary claim is that conspiracy theories typically stem not from irrationality or mental illness of any kind but from a 'crippled epistemology,' in the form of a sharply limited number of (relevant) informational sources."

Sunstein argued that "government might undertake (legal) tactics for breaking up the tight cognitive clusters of extremist theories." He suggested that "government agents (and their allies) might enter chat rooms, online social networks, or even real-space groups and attempt to undermine percolating conspiracy theories by raising doubts about their factual premises, causal logic or implications for political action."

"We expect such tactics from undercover cops, or FBI," Estrin writes at the Rag Blog, expressing surprise that "a high-level presidential advisor" would support such a strategy.

Estrin notes that Sunstein advocates in his article for the infiltration of "extremist" groups so that it undermines the groups' confidence to the extent that "new recruits will be suspect and participants in the group’s virtual networks will doubt each other’s bona fides."

Sunstein has been the target of numerous "conspiracy theories" himself, mostly from the right wing political echo chamber, with conservative talking heads claiming he favors enacting "a second Bill of Rights" that would do away with the Second Amendment. Sunstein's recent book, On Rumors: How Falsehoods Spread, Why We Believe Them, What Can Be Done, was criticized by some on the right as "a blueprint for online censorship."

Sunstein "wants to hold blogs and web hosting services accountable for the remarks of commenters on websites while altering libel laws to make it easier to sue for spreading 'rumors,'" wrote Ed Lasky at American Thinker.