Questions over Deaths of 3 Guantanamo Detainees Raised by Magazine Article 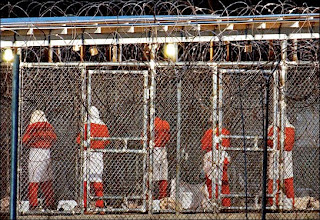 By THE ASSOCIATED PRESS (CP)

WASHINGTON — Three Guantanamo Bay detainees whose deaths were ruled a suicide in 2006 apparently were transported from their cells hours before their deaths to a secret site on the island, according to an article in Harper's magazine.

The published account released Monday raises serious questions about whether the three detainees actually died by hanging themselves in their cells and suggests the U.S. government is covering up details of what precisely happened in the hours before the deaths.

Harper's reports that the deaths of the three detainees, or the events that led directly to their deaths, most likely occurred at a previously undisclosed facility a mile or so from the main Guantanamo Bay prison complex.

Harper's based much of its account on interviews with several prison guards who said they knew of the existence of the "black" site and that they saw three detainees removed from Camp Delta several hours before the deaths were reported and were in a white van proceeding toward the secret site.

Those who knew of the black facility referred to it as "Camp No," reported the magazine, quoting Army Sgt. Joe Hickman, one of the guards.

Anyone who asked if the black site existed would be told, "No, it doesn't," the magazine reported, quoting Hickman.

After the terror attacks on U.S. soil on Sept. 11, 2001, the CIA set up a number of so-called "black" sites around the world, where harsh interrogations of terrorism-era suspects took place. The Harper's article suggested such a site at Guantanamo Bay may have belonged to the CIA or to the U.S. military's Joint Special Operations Command.

On Monday, in response to the article, Army Col. Michael Bumgarner said in an email that "this blatant misrepresentation of the truth infuriates me."

Bumgarner said that Hickman "is only trying to be a spotlight ranger; he knows nothing about what transpired in Camp 1 or our medical facility. I do, I was there." Camp 1 is the facility where the three detainees were ordinarily held."

Bumgarner added that he would have to get clearance before he can talk to the news media, "but rest assured, I do want to talk to you very badly and set the record straight."

The three Guantanamo detainees who died the night of June 9-10, 2006 were Salah Ahmed Al-Salami, 37, of Yemen; Mani Shaman Al-Utaybi, 30, of Saudi Arabia; and Yasser Talal Al-Zahrani, 22, of Saudi Arabia.

The article says that at a 7 a.m. meeting on June 10, 2006 with 50 or so soldiers and sailors, Army Col. Michael Bumgarner said that the three men had died by swallowing rags, causing them to choke to death. Bumgarner was a commander at Guantanamo Bay.

According to the magazine, Bumgarner went on to say that the news media would be guided to report something different - that the three prisoners had committed suicide by hanging themselves in their cells.

The servicemen were to make no comments or suggestions that in any way undermined the official report, Bumgarner reminded them, according to the Harper's piece, written by Scott Horton, an attorney who has worked for years on Guantanamo Bay detainee issues.