" ... 'We know from experience that torture does not produce reliable intelligence, and acting on information derived through such abuse is dangerous, to our troops, and to our nation. ... Misinformation abounds, as some have taken to the airwaves to tell us that we must abandon the rules of law, the very principles and values we have cherished since the founding of our nation, the values that [make] America America' ... " 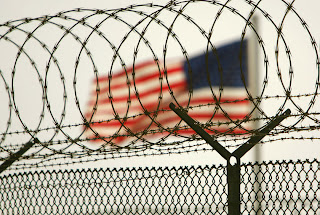 Washington, DC, United States (AHN) - Today a year ago, new incoming U.S. President Barack Obama signed an executive order to "provide the process whereby Guantanamo will be closed no later than one year from now."

Today, in a letter to President Obama, a group of retired U.S. generals say they are "deeply concerned by the hysteria permeating the public debate" around closing the military prison at Guantanamo Bay and filing cases against terrorism suspects in civilian court.

"Opponents of your plan to close Guantanamo are using the attempted bombing of Northwest Airlines Flight 253 as an excuse to renew their calls to keep the Guantanamo prison facility open and to oppose bringing terrorist suspects to justice in federal courts," reads a letter from 33 retired flag and general officers.

"We know from experience that torture does not produce reliable intelligence, and acting on information derived through such abuse is dangerous, to our troops, and to our nation."

Four of these retired generals who signed the letter to Obama and who are members of the group of retired Generals and Admirals concerned about prisoner treatment and interrogation policies, spoke to journalists criticizing those who wanted to keep detainees as enemy combatants.

"We need to close Guantanamo Prison Facility and bring terrorists to justice. Doing so will make America more secure on the battlefield, in the skies, and on our soil," said Maddox, who said that misinformation has dominated the public debate over the issues.

"Misinformation abounds, as some have taken to the airwaves to tell us that we must abandon the rules of law, the very principles and values we have cherished since the founding of our nation, the values that makes America America," Maddox said.

Maddox disclosed that the ongoing process has already made way clear for all but 70 inmates of Guantanamo saying, "not that they're all released yet, but actions determine they will be, down to about 70."

Soyster, on his part warned against "the hysteria that is permeating in the public debate around how the United States should deal with terrorism suspects is not only unwarranted, it is dangerous. It's dangerous to us."

"Gripped by fear, some are calling for the return to the use of torture techniques against terrorism suspects in hopes of garnering useful intelligence," he said.

Soyster, an intelligence pundit asked, "If the father of the Christmas day bomber believed that America would torture his son, would he have turned him in?" adding, "We need more fathers, mothers, brothers, sisters, cousins and aunts to trust in American justice and come forward with the tips, the intelligence that we need to thwart those who seek to do us harm."

The generals cautioned that the Guantanamo prison facility provides the support for al-Qaeda in recruiting, in attracting and then using the gullible young men for terrorist activities against the U.S.

Nash echoed the views of others calling for abolition of torture with, "I would just say to you that there's a direct relationship between how we behave and how people react to our behavior, especially in light of our values."

Cullen, a lawyer by profession and hailing from New York, argued, "Bringing somebody back to the scene of the crime has been the traditional thing we do."

Citing that after the World War II, "the high-ranking Nazis" were brought "to trial at Nierenberg, because Nierenberg was so associated with the rise of the terrorists of that era, the Nazi party," Cullen said, "I think the right decision was made in bringing these guys up to New York for trial once they're ready to proceed."

Members of the group had met with eight of the presidential candidates during the 2008 campaign, and when President Obama signed the Executive Orders ending torture and ordering the closure of the Guantanamo Bay prison facility in the second full day of his presidency, 16 of the group's retired Generals and Admirals stood with him in the Oval Office.

Today, the prison camp at Guantanamo Bay, Cuba, remains open with about 200 inmates.