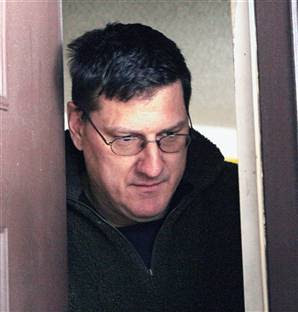 Scott Ritter talks to reporters at his home in Delmar, N.Y., on Thursday.

PHILADELPHIA - A longtime U.N. weapons inspector who blamed a 2001 sex-sting arrest on his criticism of the Iraq war has again been charged in an online child-sex case, and this time he was caught on camera.

Scott Ritter, 48, of Delmar, New York, engaged in a sexually graphic online chat with an undercover police officer posing as a 15-year-old girl nearly a year ago, police in northeastern Pennsylvania said. He then turned on a webcam and masturbated on camera, they charged.

Monroe County authorities traced the exchange to Ritter through a cell phone number he provided, and confirmed the match through photographs, according to a police affidavit. Charges were filed in November and the Pocono Record revealed Ritter's involvement on Thursday.

Ritter, an ex-Marine, declined to comment to reporters gathered Thursday at his home near Albany, New York.

"I told you guys I'm not going to say anything, so please just go away," he said after answering the door to the home, adorned with a welcome mat that reads "U.S. Marine Corps, The Ritters."

Ritter, born William Scott Ritter Jr., served as a UN weapons inspector from 1991 to 1998 before resigning. He soon became a harsh critic of the administration of President George H.W. Bush administration's push toward war with Iraq.

In 2003, he acknowledged in TV news appearances that he had faced online child-sex charges in 2001 in New York, but said they were designed to silence his war criticism. The charges were dismissed.

Ritter waived a Dec. 17 preliminary hearing and is free on $25,000 bail. He is due in court Feb. 23 for a status hearing, and would face trial March 9 barring any requests for continuance.

Defense lawyer Todd Henry did not immediately return a phone message from The Associated Press.

According to published interviews, Ritter has twin daughters who are about 16. He met his second wife, Marina, a translator, while assigned as a counterintelligence officer in the former Soviet Union. They moved to upstate New York about 10 years ago.

The affidavit says that Ritter started the conversation with the girl and then for some reason showed his face on camera. The video apparently was not recorded and the officer had to recognize Ritter from the photos he saw later. It is also not clear why he gave his full name and location. Is it so that he would not be confused with other Scott or Bill Ritters? Scott Ritter seem to act very fullish for an intelligence agent, that had been previously caught in a very similar sting. Someone seems to have created a very easy case for the local police office that had only few such cases, one of which happens to be Scott Ritter. In conspirators' defense, they did not try to totally destroy Ritter, even though they could. He may not get any time at all. Yet, his reputation is badly damaged already. The smear campaign could have failed, and then no one would have heard about it. But it has succeeded and it is all over the news.

But why bother? The Iraq war is behind. This time it could be about Iran. Ritter is the only voice in the Western world arguing that Iran is not trying to acquire nuclear weapons. The talk from the previous smear campaign seems to have faded away as he did manage to get on to cable news couple times, but he was put down again. It does seem like a cycle and no one will listen to him again. The only thing missing is a war on Iran...