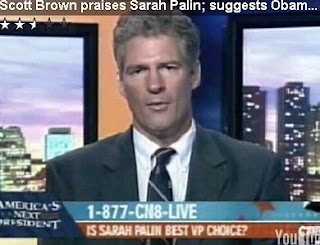 (ChattahBox)—-A recent video uncovered by the blog Blue Mass Group, reveals Massachusetts Republican senatorial candidate Scott Brown to be something of a right-wing birther nut. It’s long been known that the state lawmaker has sought out and received support from fringe teapartiers and right-wing corporate front groups, such as the Club for Growth and Dick Armey’s FreedomWorks, which are funded by Wall Street to kill the health care bill and financial regulatory reform. But it’s not been known how much of the fringe right-wing conspiracy laced Kool-Aid Scott has consumed. Well, according to an interview in 2008, Brown has OD’ed on the stuff.

Brown advanced the fringe conspiracy notion that then-presidential candidate Barack Obama was illegitimate. The former nude Cosmo model apparently thought it was amusing to falsely suggest that Barack Obama was born out of wedlock to an unmarried 18-year-old mother.

Brown even gleefully chuckled when responding to the interviewer’s statement that Obama’s parents were married when he was born, “Well I don’t know about that.” “Uh huh huh,” Brown chuckled.

According to the report by Blue Mass Group, Brown was part of a panel that aired on the now-defunct CN8 cable news channel shortly after the 2008 Republican convention. During the panel discussion, Brown vigorously defended Sarah Palin as a vice presidential candidate as having “a lot of good core values.”

When the discussion turned towards Bristol Palin’s teenage pregnancy, Brown compared the situation to Obama’s mother Ann Dunham who was 18-years-old when she gave birth to Obama. Brown then odiously suggested that Obama was born out of wedlock:

“And quite frankly Barack’s mom had him when she was—18 years old?” When the interviewer noted that Obama’s parents were married, Brown replied, “Well, I don’t know about that. Uh huh huh.”

As pointed out by the Blue Mass Group, the context to Brown’s suggestion that Obama is illegitimate is important. During that time in 2008, fringe birther conspirators were promoting a campaign to discredit Obama as illegitimate to become President of the United States, claiming that he was not a natural born citizen. Right-wingers like Jerome Corsi, co-author of “Unfit for Command: Swift Boat Veterans Speak Out Against John Kerry,” and the fevered swamps of World Net Daily pushed the lie that Obama was born out of wedlock, despite ample evidence that his parents were married when he was born in 1961.

The right-wing birthers somehow linked their crazed conspiracy theories to the notion that Obama was illegitimate. As encapsulated by Steve Benen of the Political Animal: “Brown wasn’t just attacking the future president and his parents during the interview; he was also lending credence to fringe right-wing stupidity.”

Brown has attempted to distance himself from Sarah Palin during his campaign and he has portrayed himself as a voice for ordinary citizens who are tired of the political machine. “It’s me against the machine,” says Brown. But based on his past statements, and present associations with fringe right-wing groups, if he somehow becomes elected to the U.S. Senate, Brown intends to appease the crazed right-wingers and his corporate masters; not the people of Massachusetts. The prospect is chilling.

Watch Brown gush over Sarah Palin and suggest Obama was born out of wedlock:

Posted by Alex Constantine at 8:13 PM