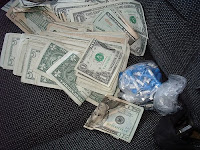 And it's not just the U.S.: Canada and Brazil have a preponderance of the drug powder on their bills, too

"For cocaine users, a rolled up $20 bill may be the most convenient tool for snorting the powder form of the drug. Or so it would seem from a new analysis of 234 banknotes from 18 U.S. cities that found cocaine on 90 percent of the bills tested. ... " - Scientific American

http://www.scientificamerican.com/article.cfm?id=cocaine-contaminates-majority-of-american-currency
Posted by Alex Constantine at 8:23 AM