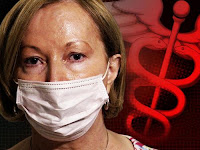 A warning that the new swine flu jab is linked to a deadly nerve disease has been sent by the Government to senior neurologists in a confidential letter.

The letter from the Health Protection Agency, the official body that oversees public health, has been leaked to The Mail on Sunday, leading to demands to know why the information has not been given to the public before the vaccination of millions of people, including children, begins.

It tells the neurologists that they must be alert for an increase in a brain disorder called Guillain-Barre Syndrome (GBS), which could be triggered by the vaccine.
GBS attacks the lining of the nerves, causing paralysis and inability to breathe, and can be fatal.

The letter, sent to about 600 neurologists on July 29, is the first sign that there is concern at the highest levels that the vaccine itself could cause serious complications ...