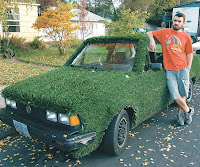 Next on their hit list is Net Neutrality, the principle that prevents big phone and cable companies from deciding what you can and cannot do online.

They're already painting new Net Neutrality legislation as an attempt to "socialize the Internet."

They dismiss as "extremists" the more than 1.5 million who support a free-flowing Web. The national coalition that supports Net Neutrality includes such "far-left elements" as the Christian Coalition, The Gun Owners of America and the American Library Association.

Astroturf red-baiting has only just begun.

The Boy Who Cried Socialism

All Net Neutrality really does is protect market competition, consumer choice and online innovation. But don't tell that to the astroturfer-in-chief, Scott Cleland of NetCompetition.org. His group is funded by phone and cable companies to attack legitimate consumer organizations and to confuse the public about Net Neutrality.

In testimonies before Congress, Cleland supported Net Neutrality before being paid by AT&T to oppose it. And oppose it he has: "Just like the Soviet socialists, the Net Neutrality movement blatantly misrepresents the facts," Cleland once said.

Behind their Cold War rhetoric is a dirty little secret: Astroturf groups are paid by corporations to erect Potemkin Villages of public support for any given issue, to sway politicians with PR and junk science, and to fool members of the media into putting them on the air.

Typically, these groups won't reveal their sources of funding, and with very few exceptions, the media forget to ask about it.

That's why Armey and Phillips squirmed under the lights when Rachel Maddow broke with the mainstream this month and pressed them about the money propping up their operations.

And it's why Free Press just released "Astroturf: Exposing the Fake Grassroots," an interactive online tool that makes it easy to view the seedy underbelly of the Astroturf groups bankrolled by big phone and cable.

The tool tracks the huge amounts of money moving from companies like AT&T and Comcast to lobbyists and political campaigns, and links it to the deceptive activities of coin-operated groups like FreedomWorks, Americans for Prosperity, NetCompetition.org and the Heartland Institute.

When asked to report the sources of its funding, Heartland President Joseph L Bast demures: Heartland "now keeps confidential the identities of all our donors" because revealing it would give fodder to those who want to "abuse a sincere effort at transparency."

Like the others, the Heartland Institute seems to think a lack of transparency gives more credence to their arguments, when in fact, it simply demonstrates what more people are coming to realize: Astroturf has no place in politics.

A healthy 21st-century democracy doesn't need phony front groups. We need openness, accountability and real debate. And we need to know whom we're talking to -- and who's talking to us.

The crucial policy decisions being made right now must be based on independent research, reliable data and honest brokers.

Powerful special interests must stop distorting the issues and hiding behind Astroturf.

Timothy Karr is the author of MediaCitizen, a weblog about the future of America's media. He is the campaign director of Free Press. From September 2003 through February 2005, Karr was executive director of MediaChannel.org and Media for Democracy.

http://www.alternet.org/media/142140/unmasking_astroturf:_smear_campaigns_threaten_health_care_and_net_neutrality
Posted by Alex Constantine at 4:12 AM