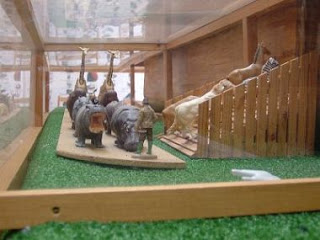 If you think private, multi-million dollar monuments to Creationist-themed education are the sole property of First-World nations with Third-World levels of religiosity (IE: the United States), well, think again. The Noah's Ark Zoo Farm is located in the lush countryside of Merrye Olde England, just 7 miles from the city of Bristol... and it has outraged the British Humanist Association who are urging British tourism boards to stop promoting it and asking the British and Irish Association of Zoos and Aquariums to take action against it. The BHA's news release states that "The zoo, which advances creationism, seeks to discredit a wide variety of established scientific facts that challenge their religious views, such as radio carbon dating, the fossil record and the speed of light."

According to New Humanist news editor Paul Sims, who visited Noah's Ark Zoo Farm, the differences between it and other tourist attractions don't strike the eye immediately. It's only when you start to read some of the signs on exhibits that you notice that, insinuated alongside normal, scientifically correct information, there are religious statements. One example Sims gives is from a poster explaining birdsong. "I learned," he says, "that while birds sing to 'sound warning' and 'mark their territory', they also do so in order to 'praise their Maker'. In fact, so wonderful is the ability of birds to sing that the necessary features clearly 'go far beyond what is biologically an advantage, and point to a musically minded Creator.'” The evidence of the Creationist perspective is more overt though in the Noah's Ark exhibit, where a scale model of the biblical Ark is displayed complete with tiny models of animals (and dinosaurs) marching into it. ...