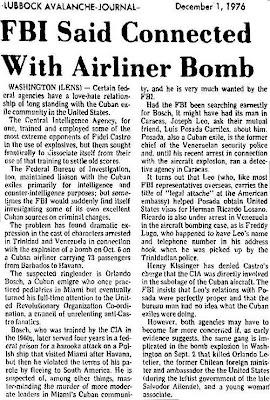 In the files, the CIA also appeared confident that Posada was a moderate force who would not embarrass the agency or the United States.

"A15 is not a typical kind of 'boom and bang' individual. He is acutely aware of the international implications of ill-planned or overly enthusiastic activities against Cuba," Posada's CIA handler, Grover T. Lythcott, wrote in a July 26, 1966, memo, using a code name for the Cuban exile.

Lythcott went on to stress that Posada had informally exercised his influence to discourage exile activities that would embarrass W.O. Lady, a code name for the U.S.

Another declassified memo describes Posada as very loyal to the U.S., of "good character, very reliable and security conscious."

But Posada would later be accused of masterminding the bombing of a Cuban airliner in 1976, hotel bombings in Havana in 1997 and other alleged crimes. He currently faces charges of immigration fraud in Texas, including lying about involvement in the Havana attacks. He declined to comment.

The documents were made public on the 33rd anniversary of the airliner bombing that killed 73 people. Posada is still wanted in Venezuela and Cuba in connection with that case. The files come from a group of CIA papers declassified between 1998 and 2003 and made public Tuesday by Peter Kornbluh of the independent, non-governmental National Security Archive. Kornbluh obtained them under a Freedom of Information Act request.

In the early 1960s, the CIA directly trained and funded efforts to overthrow Castro's government. But the CIA had backed off its efforts in the wake of the failed Bay of Pigs invasion, the Cuban Missile Crisis and the assassination of President John F. Kennedy.

Kornbluh said he was amazed at the CIA's failure in its assessment of Posada, noting the numerous terrorism-related accusations against him. Posada was convicted in a 2000 plot against Castro in Panama but was later pardoned. Previously, he had escaped from prison in Venezuela while awaiting a retrial in the airliner case. He sneaked into the U.S. in 2005 and was arrested on immigration fraud charges after he gave a press conference in Miami.

"In the last three years since Posada has been in the U.S., he has been one of the most embarrassing former assets that they've ever had," Kornbluh said. 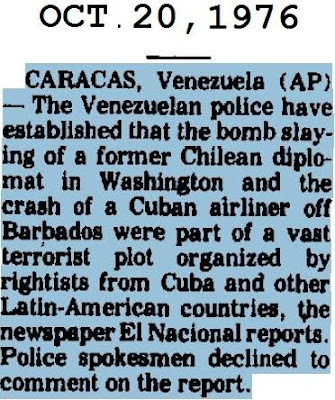 Jorge Mas Canosa, who went on to found the Cuban American National Foundation in the 1980s and became one of the most influential lobbyists in Washington through the Clinton administration, is described in one document as possessing 125 pounds of the explosive Pentolite. The memos also describe proposed sabotage of ships off the coast of Veracruz, Mexico, which Mas Canosa organized and planned to finance. It is unclear from the documents whether the plot ever took effect.

Francisco J. Hernandez, the current president of the Foundation, worked closely with Mas Canosa for years. He said the documents described actions by his friend he found difficult to believe.

"The fact of the matter is that Jorge was never a man who believed in terrorism," Hernandez said.

"Yes, in those years, he believed in taking the war of liberation to Cuba, but not to kill innocent people," Hernandez said, adding, "It's shame that 40 some years later at a time when he cannot defend himself, these allegations come."

Posada has called Mas Canosa a great friend. And in a 1998 interview, he said Mas Canosa had financed many of his activities over the years. He later recanted, saying he named Mas Canosa to protect others because the Cuban exile leader had passed away the previous year.

Following that interview and a subsequent 2005 interview with immigration officials in Texas, Posada has maintained that his English is faulty, and that he misunderstood questions directed at him in English.

In a declassified 1965 document, Posada's handler writes that, "He speaks and understands English."