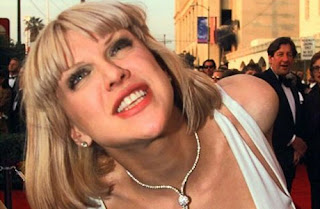 "My biggest problem is that I'm Courtney Love."

Love made the admission to a New York newspaper after fleeing Los Angeles when she was allegedly targeted in bogus raids by off-duty police hired by her employees.

Love claimed her home in Malibu was visited by individuals who claimed to be police officers in the Los Angeles Police Department and from the Sheriff's Department in Malibu.

Love claims during the "raids", a "flood of guys, at least 10" came to the home. She said: "They said there was an ambulance outside, even though we never saw one. I tried to be charming. But one of the guys points a gun at me. My daughter, Frances, ran and hid under the house."

The singer, who has been at work to relaunch her music career, said she hired computer consultants to uncover a scam by unidentified former staffers who were trying to steal money from her by using computer viruses and cell phone monitoring.

Love has relocated to the trendy Tribeca neighborhood [and was recently reported to be broke and holed up at the Mercer Hotel.