French Minister Pressured to Resign Over Sex With Boys 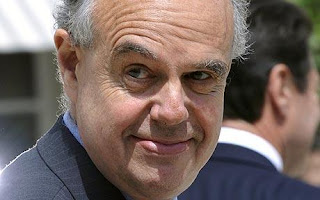 Mitterand's denial: "... 'I condemn sexual tourism, which is a disgrace. I condemn paedophilia, which I have never in any way participated in,' the 62-year-old nephew of François Mitterrand, the late Socialist president, said in an interview on TF1 television. ... "

Mitterand verbatim: " ... Mitterrand 'paid for sex with boys' In his 2005 autobiography The Bad Life, he wrote: 'I got into the habit of paying for boys ... All these rituals of the market for youths, the slave market excite me enormously.' ... "

Exhibit A is the latest sex scandal to hit the airwaves. It concerns one Frédéric Mitterand, France's culture minister (and nephew of former French President François Mitterand.)

Some of you may remember Monsieur Frédéric Mitterand as an early European defender of Roman Polansky in that whole sordid affair last week. (Boy, how time flies. That was a whole David Letterman ago . . .) Mitterand decried the "media lynching" that Mr. Polansky was subjected to back in the 1970s and accused America of showing a "frightening face" by reviving the case now. (The French government subsequently distanced itself from this view.)

But now it appears that in defending Polansky, Mitterand brought some of his own skeletons out of the closet. Apparently, in his 2005 autobiography, "La Mauvaise Vie" (The Bad Life), Mitterand confessed to paying "young boys" for sex while vacationing in Thailand. As he wrote at the time: "We could say that such a spectacle is abominable from a moral point of view, but it pleased me beyond reason. The profusion of attractive young boys who are immediately available puts me in a state of desire and I do not need to restrain or hide myself." (Mr. Mitterand has subsequently explained that he was using the word "young" loosely and really referring to young men.)

Young boys . . . young men. The jaw-dropping thing from an American standpoint is that Mitterand managed to get appointed minister of culture (!) with that kind of bio. And he did. France has a long-standing tradition of exercising discretion where politicians' personal lives are concerned. (We all remember Uncle François' funeral, which was attended by his wife, his mistress and their daughter.)

Earlier this week, Marine Le Pen [daughter of French politician Jean-Marie Le Pen] of the far right National Front Party read portions of Mitterand's book aloud on television and called for him to resign. Now some members of the Socialist Party have followed suit, with one member of Parliament declaring: "I find it shocking that a man can justify sex tourism under the cover of a literary account."

Mitterrand told the Telegraph on Tuesday he was "flabbergasted."

If this scandal takes hold, it will represent a sea change for France both culturally and politically. As I noted earlier this summer, Europeans used to mock Americans for their prudish attitudes toward sex scandals. Now they are slowly beginning to look -- dare I say it? -- more American in both the scrutiny and tolerance they extend toward the private lives of their public figures.