Karzai Brother 'on CIA Payroll'/"Plausible" Denial from Karzai Contradicted by Congressional Officials, who have Known about CIA Ties "for Some Time"

Look what those warped, brain-damaged, tinfoil-fringe conspiracy theorists at the NY Times are saying now: " ... Ahmed Wali Karzai, a suspected participant in Afghanistan's booming illegal opium trade, has taken payments for much of the past eight years ... " We sober, objective news reporters at The Blacklist don't buy into wild conspiracy theores propagated by the "mainstream" media, but we elite, informed professionals have known of these allegations for years, and no one cared so only casually reported on CIA/drugs - too pedestrian. Yawn. When you get down to it, everybody already knows - old story - so we'll let the naive ignoramuses of the media-at-large catch up. We'll just get back to assassinations made to look like suicides, mass-murdering coup plots and such, and leave the common, work-a-day CIA drug trafficking conspiracy theories to drooling "mainstream" media Bozos engaged in a perennial search of a clue. - AC 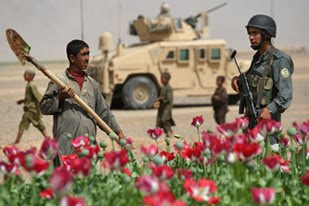 The brother of Hamid Karzai, the Afghan president, has been receiving regular payments from the US Central Intelligence Agency (CIA), The New York Times has reported.

The newspaper, quoting current and former US officials, said on Wednesday that Ahmed Wali Karzai, a suspected participant in Afghanistan's booming illegal opium trade, has taken payments for much of the past eight years that the US has been in the country.

It said Karzai gets paid for a variety of services that include helping in recruiting an Afghan armed force that operates at the CIA's direction in and around the southern city of Kandahar, where he has a home.

But the newspaper added that Karzai said in an interview that he only co-operated with US civilian and military officials, and did not engage in the drug trade, or receive payments from the CIA.

The Times said the financial ties and close working relationship between the intelligence agency and Karzai raise significant questions about Washington's war strategy in Afghanistan, which is currently under review at the White House.

The US has stationed troops in the country since 2001 as it attempts to defeat Taliban fighters there.
-----
"If we are going to conduct a population-centric strategy in Afghanistan, and we are perceived as backing thugs, then we are just undermining ourselves" - Major-General Michael T Flynn, senior US military intelligence official in Afghanistan
-----
The newspaper report comes amid deepening concern about growing US troop deaths in Afghanistan, with October going down as the deadliest month since the soldiers were deployed.

The Times quoted Major-General Michael T Flynn, the senior US military intelligence official in Afghanistan, as saying: "If we are going to conduct a population-centric strategy in Afghanistan, and we are perceived as backing thugs, then we are just undermining ourselves."

The ties to Karzai have created deep divisions within the administration of Barack Obama, the US president, according to the newspaper.

The Times says that critics say the relationship complicates Washington's increasingly tense ties with Hamid Karzai, who has struggled to build sustained popularity among Afghans and has long been portrayed by the Taliban as a US puppet.

The CIA's practices, the newspaper reported, also suggest that the US is not doing everything in its power to stamp out the lucrative Afghan drug trade, a major source of revenue for the Taliban.

Several US officials the newspaper interviewed said the relationship between Ahmed Wali Karzai and the CIA is wide ranging.

The officials said he helps the CIA to operate the Kandahar Strike Force, an armed group that is used for raids against suspected Taliban fighters.

On at least one occasion, the newspaper reported, the officials said the strike force had been accused of mounting an unauthorised operation against an official of the Afghan government.

The president's brother is also paid for allowing the CIA and US Special Operations soldiers to rent a large compound outside the city - the former home of Mullah Mohammed Omar, the Taliban's founder - The Times said.

The same compound is also the base of the Kandahar Strike Force.

The newspaper quoted a senior US official, who spoke on condition of anonymity, as saying: "He's our landlord."

Paul Gimigliano, a CIA spokesman, told The Times: "No intelligence organisation worth the name would ever entertain these kind of allegations."

"The CIA ties to Karzai — who for months has been suspected of being part of Afghanistan's illegal opium trade — are reported to have created divisions in the administration of U.S. President Barack Obama. ... The Associated Press said a U.S. congressional official, who spoke on condition of anonymity, confirmed the accuracy of the details in the Times story, saying that some members of Congress have known about the link between Karzai and the CIA 'for some time.' ... "