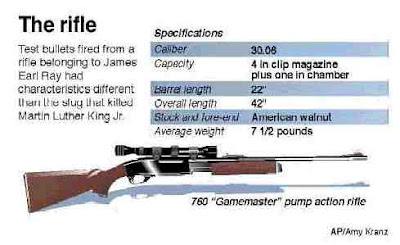 A: No. In July 1997, a Memphis judge found that ballistics tests conducted on the rifle of James Earl Ray forced him to conclude that another gun was used in the murder.

" ... Ray admitted buying a rifle similar to the murder weapon and renting the room at the Memphis flophouse where the shot was fired. But soon after being sentenced, Ray began to recant his guilty plea, saying he had handed over the gun to a man he identified only as 'Raoul.' ... "
http://www.cnn.com/US/9804/23/ray.obit/
(Graphic source: http://impiousdigest.com/index.php?option=com_content&task=view&id=19&Itemid=12)

Examiners of the rifle didn't bother to CLEAN it, and so results came up 'inconclusive" consistently - yes, the cover-up continues to the present day:

" ... The examiners said the evidence was inconclusive, as were previous tests by the FBI and the House Select Committee on Assassinations. They added, however, that ;appropriate cleaning' and another test firing of the rifle could produce bullets with markings that are suitable for comparison. .
... "
http://www.cnn.com/US/9708/01/briefs.pm/mlk.ray.rifle/index.html
Posted by Alex Constantine at 3:56 PM