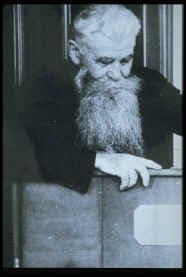 2008-01-21 - What we classify as science is determined by the times we live in. That has been shown by a project of the Austrian Science Fund FWF on the phenomenon of Welteislehre (the Cosmic Ice Theory). At the start of the 20th century, a broad swathe of the general public believed in this now discredited theory of what the universe is made of and how it was created. The findings of this project are now being published as part of a comprehensive anthology of pseudoscience.

The term pseudoscience is used to describe a theory that claims to be scientific but which is neither objective nor rational in its approach. One such example is the Cosmic Ice Theory "discovered" by the Austrian Hanns Hörbiger in 1894, which states that ice was the basic substance of all cosmic processes and that ice moons, ice planets and the

"global ether" (also made of ice) determined the entire development of the universe. In the modern world, this theory is seen as nothing more than an obscure idea with no scientific basis.

But, as a project run by the Institute of History at the University of Vienna has now shown, that was not always the case. Even though contemporary scientists rejected the Cosmic Ice Theory, it did enjoy a great deal of popularity in German-speaking countries during the mid-1920s. Indeed, it eventually developed into an established world view.

The theory enjoyed widespread popularity primarily due to the way in which Hörbiger communicated his world view, as project scientist Dr. Christina Wessely explains: "The Cosmic Ice Theory portrayed the world in a simple and vivid manner, in the form of a story. Astronomical and geological processes were paired up with spectacular stories in the vein of fantasy-laden adventure novels. And while this theory was easy to follow, conventional academic sciences seemed only to offer numbers and abstract equations, appearing incomprehensible and out of touch. As a result, the Cosmic Ice Theory seemed less esoteric to the man on the street than the conventional sciences." As a result, when it came to defining what constituted scientific understanding, the "common sense" of the wider public and the methodical approaches of the scientific community came into conflict.

Following the death of Hanns Hörbiger at the beginning of the 1930s, the popularity of the Cosmic Ice Theory began to wane, only to be resurrected by National Socialism. As well as Heinrich Himmler, who supported research in this area and made it part of his own personal remit, Hitler was also interested in the theory. The scientific standing of the Cosmic Ice Theory was therefore to be underpinned through political pressure, despite major resistance from German physicists and astronomers. However, after the Second World War, the Cosmic Ice Theory was not just discredited as incorrect but was also seen as national socialist pseudoscience and consequently all but vanished from social consciousness.

THE RISE OF SCIENCE

The FWF project, which examined large volumes of previously unexplored materials, delivers an important insight into the social, philosophical and political importance attached to the popularisation of natural science and technology during that period. It contradicts the current assumption that the sciences enjoyed an uninterrupted rise in popularity, and instead indicates that they often had to struggle in the face of "false views of the world".

Dr. Wessely explains: "The Cosmic Ice Theory clearly illustrates how the boundaries between science and pseudoscience can become blurred. It exemplifies that the history of modern science is inextricably intertwined with fantastic imaginations and spectacular mistakes. These mistakes often call modern sciences into question, challenging them and yet simultaneously driving their ongoing development. In the end, pseudoscience does more to strengthen the scientific discourse than it does to damage it. These and other findings on the phenomenon of the Cosmic Ice Theory will shortly be published in an anthology of pseudoscience that Dr. Wessely is co-editing.