Two Articles on the Kennedy Assassination from Workers' World, 1963 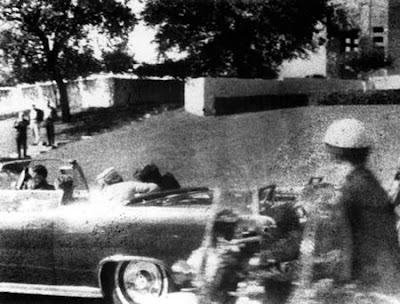 Editor’s note: Workers World is in its 50th year of publication. Here are excerpts from two articles originally published in Volume 4. The first, which appeared in the issue dated Nov. 29, 1963, was actually written on Nov. 26— four days after the assassination of President John F. Kennedy. The second, on the role of the Warren Commission, appeared in the following issue, dated Dec. 6, 1963.

The United States of America came close to a fascist coup d’état and the establishment of a right-wing, reactionary, totalitarian dictatorship.

This is really the main and fundamental fact to emerge from the assassination of President Kennedy.

That the coup d’état did not actually come off can only be explained by the fact that the forces of political reaction, virulent racism and “preventive war” militarism had failed to coalesce at the critical moment and emerge with “a man on horseback.” ...

They are not yet ready to come forward, but the “national disaster” to which they have been hopefully looking forward for a long time is now an accomplished fact. ...

Beyond the shadow of a doubt, the scheme of the conspirators is based on the classical experience of the Nazi takeover—the Reichstag fire—which Hitler prepared and utilized to smash the Weimar Republic, and erect his totalitarian regime. The Reichstag fire created the atmosphere of national emergency and disaster. It was called the work of a “communist agent.” But this was proven to be a monstrous fabrication. ...

Aside from any and all considerations of the guilt or innocence of Oswald, his brutal treatment at the hands of the Dallas authorities is in the classical spirit of fascist terror.

“A man is presumed innocent until proven guilty by a jury of his peers.” This has been regarded as one of the most elementary democratic rights in this capitalist democracy. ...

[T]his basic right of the accused was summarily eliminated just at the moment when it was most urgently needed to prove the alleged existence of democratic rights. The accused, however, was tried and convicted by the press, radio and TV, all of whom acted in varying degrees as accomplices of the Dallas police and the forces of neo-fascist reaction behind them.

But the ultra-rightist plot for a governmental takeover proved to be premature.

Deep as are the antagonisms within the ruling class over questions of policy, they have not yet matured to the extent where the most substantial section of the capitalist class and the banker-generals who rule on their behalf was ready to dispense with the façade of bourgeois democracy and throw in its lot with a totalitarian dictatorship.

The role of the Warren Commission

Kennedy is dead. Oswald is dead. A new president promises to carry on and pursue the policies of his predecessor. But the forces of political reaction, virulent racism, “preventive war” militarism, which failed to combine at the critical moment to erect the totalitarian dictatorship, give only the appearance of being cowed. Actually they remain intact and intransigent. ...

[S]oon the eyes of the world will be focused on the seven-member lily-white commission headed by Chief Justice [Earl] Warren.

It is exceptionally important that the progressive-minded people of the country and of the world be adequately apprised both of the nature as well as the composition of the panel which has been appointed by President Johnson. ...

Rare indeed are historical examples in which significant political institutions or commissions rise above their narrow class interests and social background.

How, for instance, can such a political personage as Senator [Richard] Russell from Georgia, who represents poisonous racism, big business privileges, and unbridled militarism, rise above his class and racial prejudice and become impartial?

How, too, can John J. McCloy rise above his class connections as former chairman of the Chase-Manhattan Bank, as well as top administrator of the cold war policy of the Dulles-Eisenhower administration which he served?

How can Allen Dulles, one of the principal conspirators of the Cuban invasion and the monstrous war-provoking U-2 incident, be impartial in examining a plot like this?

And is Senator [John Sherman] Cooper of Kentucky and Representative [Hale] Boggs of Louisiana, or Representative [Gerald] Ford of Michigan—all servile tools of big business interests—capable of rising above their class interests, business connections and race prejudice?

The people must be warned that the judgment of the commission will not be decided by considerations of abstract justice. [It] will be based on the relationship of forces both nationally and internationally. It will be based, also, on the impact of intervening events, and the ability of the mass of the people, the labor movement and the liberation struggle, to act as an obstruction to the gathering forces of neo-fascism, and as a support for the preservation of democratic rights and civil liberties.

The very convocation of such an extraordinary commission is in itself an implied admission of the existence of a conspiracy of the ultra-right and fascist forces which hoped through the assassination to achieve a coup. To establish the guilt or innocence of merely an individual it should not be necessary to convoke such an extraordinary panel. This could easily be accomplished by lesser investigative and judicial processes.

To constitute such a broad committee makes it evident that it has a political task. That it in effect will pass on the degree to which the remnants of bourgeois democracy will continue in the U.S. and whether it is willing and capable to stand as a bulwark against a fascist conspiracy.

A whitewash would pave the way for a fascist dictatorship. The greatest danger, however, lies in the capitulation by the commission to the rightist hysteria, which would implicate the progressive, militant, and anti-fascist forces in the U.S. in a monstrous frameup.

The FBI has, according to latest press dispatches, submitted a report on Oswald indicating not only that they consider him guilty, but also that they believe he carried out the assassination of President Kennedy without accomplices.

From this it would appear to follow that no foundation is being laid for the construction of a frame-up against the left. But let us not be deceived by appearances.

A more cogent reason for their report that Oswald was guilty and a “loner” is to bar the way to an investigation of the fact that the assassination was part of a rightist plot with many accomplices.

Articles copyright 1995-2007 Workers World. Verbatim copying and distribution of this entire article is permitted in any medium without royalty provided this notice is preserved.