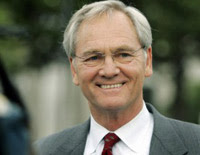 The Fight is Not Over, Not for Me, Not for Karl Rove
by Governor Don Siegelman

Will you help me in my fight against Karl Rove? This fight is not over; not for me, not for Karl Rove!

Many of the people who did Rove's dirty work are still U. S. Attorneys. Only a handful of the Bush appointees have been replaced: At last count, just five of 93! That means Rove's clones are still calling the shots! They are a cancer on our system of justice and must be removed before our democracy can be healed.

George W. Bush fired Bill Clinton's U.S. Attorneys the day after he took office. But eight months after President Obama took office, my prosecution is still being led by the same Rove/Bush prosecutor, who is married to one of Rove's closest political allies who ran my opponent's campaign while his wife, the U S Attorney, indicted me during my campaign for re-election!

Every day Rove's attack dogs remain in power is another day our nation fails to move past the crimes perpetrated under the Bush Administration.

That's why, I launched a new campaign,wwwFireRovesProsecutors.com, dedicated to calling on the White house to remove those Rove-vetted U.S. Attorneys who are still poisoning the Department of Justice.

My case is now before the U.S. Supreme Court. For the first time in history First Amendment Law Professors and former state Attorneys General, 91 of them, both Democrats and Republicans have filed briefs saying in essence that I should not have been prosecuted! If you are interested in the important First Amendment issue at stake here, (click this link to read the briefs)

This fight is about more then my personal freedom...it's about making sure this kind of abuse does not happen to anyone one else. To get this corrected, Rove must be held accountable and his prosecutors must be replaced...now!

This fight is not over; not for me, not for Karl Rove, and not for our democracy.
Please donate….. we desperately need financial help to continue in this battle.

Because my legal fight is in the here and now, and is so expensive, I am asking that you please send a contribution to my Legal Defense Fund : Donate

Please send your message to the President by going to:wwwFireRovesProsecutors.com.

Thank you so much for all you've done to get us this far!
Sincerely,

http://www.pacificfreepress.com/news/1/4765-undoing-karl-qroves-prosecutorsq-must-go-governor-siegelman-demands.html
Posted by Alex Constantine at 4:29 AM