'Old Lady' Stadium with a Nazi Past 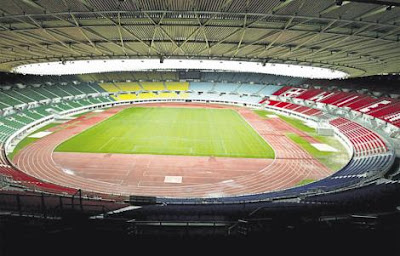 Ernst Happel Stadium in Leopoldstadt, the 2nd district of Vienna, known as the Prater Stadium (Praterstadion) prior to 1992. The stadium was renamed in honour of Ernst Happel following his death in 1992. It will host the Euro 2008 final on 29 June.
For more, see: http://www.worldsportsarenas.com/

VIENNA (AFP) — It may be called rather fetchingly the 'Old Lady' but the stadium for Sunday's Euro 2008 final between Germany and Spain has a dark past - it was formerly a site for Nazi propaganda and racial experiments. ...