Whatever Happened to Rennie Davis of the Chicago Eight? 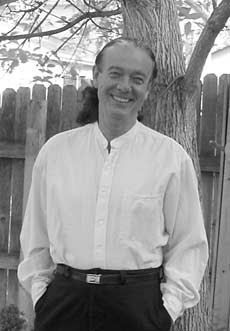 ... Even as the war in Vietnam still raged, Rennie Davis became an acolyte of Guru Maharaj Ji, the 16-year-old leader of the Divine Light Mission. In November 1973, the Mission organized "Millennium '73," a three-day event at the Houston Astrodome, which they advertised as "the most significant event in human history." For those still consumed with the need to push for an end to the war in Vietnam, it promised "a thousand years of peace for people who want peace." In other words, peace could come to the world when individuals found inner peace.

Nowadays, Davis describes himself as a "venture capitalist" and continues to urge suffering humanity to discover inner peace. An interview with Davis in Forbes magazine described him as a "financial adviser to various CEOs and senior executives from major companies, including Gates Rubber Company, the Manville Corp., HBO, and IBM." He told the magazine:

To me, money is...a psychological construct. One of the great discoveries occurring in the present time involves recent discoveries in physics about the thought-reactive nature of this world. It turns out our entire reality is a psychological construct, and all our experiences, including those involving money, are coming from ourselves. How you feel about wealth and money -- your own perceptions about your own abundance -- shape your experiences of money.

Money as a psychological construct? Maybe somebody should communicate that to the millions of Americans facing foreclosure right now. Nowadays Davis presides over the Foundation for a New Humanity, whose Web site bills it as providing "longevity and regeneration resources and other tools that may assist you to be the change you seek for the world." One of those resources is a peace crystal that is advertised in their online store:

The Magical Pendant To Give Peace A Chance

Though Rennie Davis is best known for his gutsy political activism in the late 60s, he hasn’t exactly been standing still since.

Author, venture capitalist, self-awareness lecturer, Davis has appeared on Larry King Live, Barbara Walters, Phil Donahue, VH1, CNN, and many other network programs. He has consulted and developed business strategies for Fortune 500 companies and is the founder of Ventures for Humanity, a technology development and venture capital company working providing resources to commercialize breakthrough technologies.

In the 90s, Davis spent four years on “sabbatical” from business in remote deserts and valleys. He emerged from the yawning recesses of the Grand Canyon with a deeper insight into the human condition and workings of nature and a revolutionary new message—perhaps “evolutionary” is a better term: a political or social change strategy that he says builds upon the “long progressive march for human freedom throughout history.”

He believes that this new vision is as earth-shattering and radical a quantum shift in collective consciousness as when the earth went from flat to round. Recently invited by a number of Native American leaders to share his revelations in conjunction with other forward-thinking people, Davis tells me a tour is in the works possibly for the fall.

1968. A tumultuous year. Vietnam has become the longest war in U.S. history. American casualties surpass the 30,000 mark. Anti-war sentiment grows exponentially on campuses across the country. Riots break out in 125 cities following the assassination of Martin Luther King, leaving 46 dead. President Lyndon Johnson will quit his reelection bid when Eugene McCarthy challenges him over his support of the war. Robert Kennedy will enter the fray, only to be assassinated on the night he wins the California primary.

A group of political activists organizes demonstrations for the Democratic Convention in Chicago. The mayor calls in thousands of additional National Guard and army troops. In the resulting clashes, Davis, a leader of Students for a Democratic Society (SDS), is arrested and charged with incitement along with SDS founder Tom Hayden, Abbie Hoffman, Jerry Rubin, and Black Panther Bobby Seale. Davis tells me more viewers tuned in to the goings-on at the convention than the first moon walk.

At the trial, Davis and Abbie Hoffman are the only defendants to testify. Filled with rancor and street theater, the trippy courtroom spectacle pits yippies, hippies, and anti-war activists against the establishment and includes testimony from counterculture icons like drug guru Timothy Leary, beat poet Allen Ginsberg, and folk singers Phil Ochs, Arlo Guthrie, Pete Seeger, and Judy Collins.

The Chicago 7 become household names—either loved for their highly principled, bold, and irreverent stand, or despised for their utter disrespect for authority. Such were the dichotomous times, a bipolar country bursting at the seams. Fancy that, eh?

The “radicals” all receive stiff sentences but are eventually acquitted.

In a phone interview, I ask Davis, “Let’s start at the top. Why are you coming to Iowa?”

“I’m coming to do a public presentation followed by a workshop,” he says. “The focus of the first is basically an assessment of the world situation, a very deep understanding of the time in which we live. My argument is that this is not just another generation passing through but that very specific things are coming to pass, things that have been predicted by the Hopis and other Native American legends. . . .

“If you were to do a survey of what causes misery on earth, it would tend to fall into three broad categories. One, we can call systems: the economy, AIDS, terrorism—things that are ‘system’ in nature. The second would be a list of everybody to blame: Bush is the cause of my misery, my ex-wife, my boss. The third would be things that come utterly out of left field: a tornado through town, a tsunami, events that are not in our apparent control.

“What this huge list would have in common—something everybody would agree with—is that the cause of misery are things outside ‘myself’. But the cause of our misery is absolutely, positively not at all what we believe it to be. This is not a new view. Certainly saints and philosophers in every generation have basically argued if you want to change the world, you have to change yourself.

“And the shift is huge, starting with the political process. . . .What I’m suggesting is that every time you blame, you turn your power over, and that the real understanding of blame on any level is a disempowering act—when in fact you’re creating the whole thing, including the misery that comes at you from the weather. If there is fear as a dominant human reality, the fear is within ourself. It’s not an objective thing, it all comes from within.”

Davis’s vision rests upon a grand unification theory of personal empowerment that calls for the laying aside of all vestiges of blame and shame. It directly challenges the “we-and-they” victim-based finger-pointing political model’s old school separation theology, if you will.

When I ask if this represents a fundamental break with his activist past or if it’s ultimately a wider reckoning, he says he’s not sure. One thing’s for sure though: the man is a delight to talk with—articulate, affable, inspired, expansive.

“Evolution is self-selecting. You’re basically choosing your course every step of the way, but in addition to that, there are gifts that belong to us should we choose them. What I’m doing is giving a precise rundown of what those gifts are that we can claim whenever we’re ready to do so. So you can, in a sense, see your future, which is quite magnificent, and it will become your future with a certain degree of let-go and openness.

“The process for me is to build a series of communities across the country that are attempting to open an age of discovery, unlock the creative genius of the human race, create options where it appears no options exist, and embrace a series of breakthrough discoveries that are now present in the world.”

What the bleep? This sounds like somebody John Hagelin and Neale Donald Walsh would like.
Posted by Alex Constantine at 5:44 PM