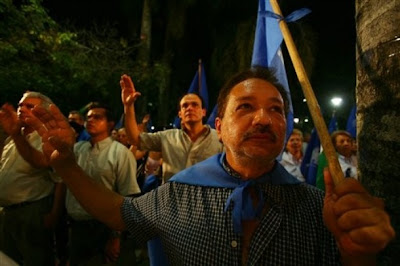 Bolivia is awash with rumors about an impending right-wing coup against the elected government of president Evo Morales. These rumors took on more importance as the Venezuelan president Hugo Chávez invited Evo Morales, Daniel Ortega, president of Nicaragua, and Carlos Lage, vice-president of Cuba, to Caracas for a summit to discuss how to defend the Bolivian government in the event of a coup.

If the ruling class persist with their attempts to overthrow the Morales government, the country could be drawn into a civil war with devastating consequences. What is developing today in Bolivia is a struggle between revolution and counter-revolution. This poses the immediate question for the working class and poor of what measures are needed to avoid defeat.

The Morales government has been in power for just over two years. It has been a popular government but at no point has it sought to organize the mass of the population and workers to implement a socialist program. To avoid defeat it is now urgent to cast aside the illusion that Bolivia can have socialism without affecting capitalism.

The situation now unfolding in Bolivia calls for the immediate mobilization and organization of the working class to take the revolution forward and avoid repeating the mistakes of the Allende government in Chile in the early 1970s.

Evo Morales, the first indigenous president in the history of Bolivia, fulfilled his election promise to rewrite the country’s constitution and give more rights to the country’s indigenous majority - who throughout Bolivia’s history have been exploited and discriminated against by a minority of European descent.

His government party, MAS (Movement towards Socialism), promised to nationalize the oil and gas industry of the country and to implement far-reaching land reform.

The road toward the acceptance of a new constitution, written by the delegates of an elected constitutional assembly, has repeatedly been postponed and sabotaged by the right-wing minority around the opposition party Podemos.

The MAS has the majority in the Bolivian Chamber of Deputies with 72 seats against the 43 seats of Podemos. In the Senate, Podemos holds a small majority. After a long struggle the Senate approved the text of the constitution on 28 February 2008 to be put to a national referendum while the right-wing in the states of Santa Cruz, Beni, Pando, Chuquisaca and Cochabamba announced simultaneous local referenda on autonomy.

In this way, the ruling elite in the Eastern states, which still refuses to acknowledge the proposed draft constitution, is trying to split the country, provoke a political confrontation and prepare for violence including the possibility of civil war.

The MAS government abided by the ruling of the national electoral commission and called off the constitutional referendum. The department of Santa Cruz, the focal point of the opposition to the MAS government, went ahead with its referendum on autonomy.

The Eastern lowlands are where the bulk of Bolivia’s oil and natural gas deposits are to be found. It is also where most of the arable land is owned by a small minority in huge estates.

In Santa Cruz 15 families control half a million hectares of land. For the peasants working on these landholdings conditions have been the same for 200 years. At least 500 families live in serfdom, tied to the land and the landlord. More than 8,000 children between the ages of 5 to 14, work on sugar plantations without receiving wages, education or health services.

Part of the proposed constitutional referendum is to limit the size of the landed estates to 5,000 or 10,000 hectares and to give ‘autonomy’ to the indigenous people. Of course, the right wing in the east wants autonomy for itself - the autonomy to exploit the natural resources and the people.

The landowners employ paramilitary forces to protect their holdings and to expand their lands illegally, evicting indigenous groups and subsistence farmers.

The Comité Pro-Santa Cruz, the campaigning organization for autonomy for the east, is made up of the main business organizations in the department.
Together with the Juventud Crucenista and several semi-fascist organizations, they are terrorizing anyone who dares to challenge their authority. The houses of local trade union leaders have been fire-bombed and pro-MAS demonstrations are attacked by thugs.

The MAS was one of the most popular party in Santa Cruz, both in the 2005 elections and in the elections to the Constituent Assembly. The key issue, however, is that the MAS has not been able to undercut the social basis of the right-wing, has stalled on land reform and has let itself be intimidated by armed groups.

It is clear that the right wing in Santa Cruz together with the elite which has plundered Bolivia in the interests of international capitalism for decades is not going to allow power to slip from its hands without a fight. The weakness of the Morales government has been that it has not used its majority to break the power of the right wing by overthrowing capitalism.

The renegotiation of the hydro-carbon contracts with the multinationals was hailed by the majority of Bolivians as a step in the right direction. Since then the illusion entertained by the government that it is possible to come to a compromise with the ruling class and build ‘Andean capitalism' has paralyzed the government.

The weakness of the Morales government and its refusal to build the MAS from a coalition of movements into a political party capable of leading a united struggle of the workers and poor, has invited more right-wing aggression.

A coup or a civil war would have devastating consequences for the workers, poor and indigenous people of Bolivia. Immediate measures must be taken to counter the threat of a coup. The CWI calls for the formation of a defense organization, bringing together the trade unions, social movements
and the indigenous federations.

Measures should be taken immediately to organize propaganda among the army, organize the conscripts into committees for the defense of the revolution, to prepare to refuse to obey orders that are aimed against the government, and to agitate in favor of the election of officers. Workers
and peasants’ militia should immediately be formed.

The elected committees in workplaces and local communities should come together on a city, regional and national level, organized on a socialist program, and start taking over the daily running of society. This would be the embryo for organizing a peasants’ and workers’ government, and a
future workers’ and peasants’ state to start building a socialist society.

The CWI calls for an international campaign to be organized in defense of the Bolivian revolution.
Posted by Alex Constantine at 8:59 PM