Thousands of Bolivians Protest against U.S. Asylum for Genocide Suspect 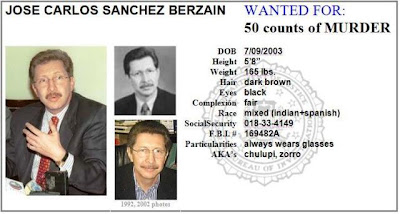 Thousands of Bolivians Monday surrounded the U.S. embassy in La Paz in protest over the U.S. decision to give political asylum to former Bolivian Defense Minister Carlos Sanchez Berzain, who is accused of genocide.

According to news reaching here, protesters broke through police security cordons made up of vehicles. The protest came after Sanchez Berzain told local radio last week that a U.S. court had granted him political asylum.

The demonstrators also voiced their anger over Washington's sheltering of former Bolivian President Gonzalo Sanchez de Lozada, who is now living in the United States and is accused of killing dozens of Bolivians and wounding hundreds of others in the conflict between the army and anti-government protesters in 2003.

The U.S. embassy in La Paz, which says Sanchez Berzain's immigration status is his private affair, has neither confirmed nor denied if the United States has granted him political asylum.

Rogelio Mayta, lawyer for the dead and injured victims in the 2003 conflict, said that if the United States does grant asylum to Sanchez Berzain, the extradition of both Sanchez Berzain and Sanchez de Lozada will be complicated.

Bolivian President Evo Morales Sunday called on Washington to cooperate with Bolivia on the extradition.

Sanchez de Lozada stepped down as president during the political upheaval in 2003 and fled to the United States after he ordered the repression of a demonstration against his plan to sell natural gas through Chile to North American countries, a deal that his critics said would help only the rich.

In September 2007, Bolivia's supreme court asked the government to start the process to extradite Sanchez de Lozada. On Monday local Bolivian daily La Razon quoted U.S. Ambassador Philip Goldberg as saying that Washington has yet to receive a formal extradition request from the Bolivian government.