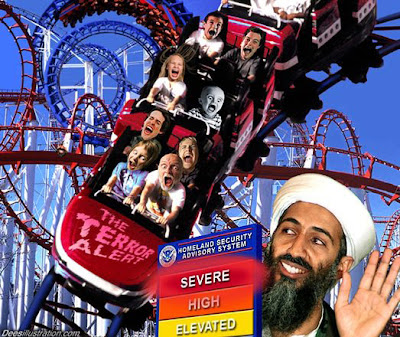 ... As has happened with increasing frequency in recent years, another blockbuster story revealing the anti-democratic impulse within the top echelon of the U.S. government has appeared and vanished overnight. According to Cold War-era files declassified last week, FBI director J. Edgar Hoover repeatedly advised President Harry Truman to arrest “all individuals potentially dangerous” to national security, jail them in military prisons and try them before kangaroo tribunals that “will not be bound by the rules of evidence.”

“For a long period of time the FBI has been accumulating the names, identities and activities of individuals found to be potentially dangerous to the internal security through investigation,” Hoover wrote in a 1950 memo. “These names have been compiled in an index, which index has been kept up to date.”

Capitalizing on anti-communist hysteria at the start of the Korean War, Hoover asked Truman to preemptively detain 12,000 people, 97 percent of them American citizens, in order to “protect the country against treason, espionage and sabotage.”

Hoover was a lunatic. Truman ought to have fired him on the spot. Instead, in September 1950 Congress took his advice and passed a law authorizing the detention of “dangerous radicals” if the president declared a national emergency. Truman signed it. In fact, he declared such an emergency three months later. No one knows why, but the president never actually followed through with mass arrests. Hoover’s “subversives”–people suspected of left-wing political sympathies–remained free. He was wrong. There were no acts of sabotage.

It wasn’t the first time the government went “crazy.”

Between 1919 and 1921 the Bureau of Investigation (predecessor of the FBI) carried out the Palmer Raids, named for Alexander Palmer, Woodrow Wilson’s attorney general. The BOI rounded up 10,000 lefties, anarchists and foreigners on a list compiled by a young J. Edgar Hoover, then in charge of the Justice Department’s General Intelligence Division. Many were tortured. Five hundred fifty were deported.

Palmer’s clampdown accomplished nothing. On September 16, 1920, a bomb attributed to anarchists went off on Wall Street, killing 38 people and wounding over 400.

During the 1960s and 1970s the CIA–in violation of its charter, which limits the agency to acting overseas–cooperated with local police departments across the country to compile a list of 300,000 Americans and organizations suspected of opposing the Vietnam War. On April 6, 1984, President Ronald Reagan signed National Security Decision Directive No. 52. Reagan targeted 400,000 people for arrest and confinement at concentration camps in mothballed Army bases. The National Security Council’s “secret government within a government,” as Congressional investigators later described it, planned to cancel the 1984 presidential election so Reagan could remain in office indefinitely.

“Lt. Col. Oliver North, for example, helped draw up a controversial plan to suspend the Constitution in the event of a national crisis, such as nuclear war, violent and widespread internal dissent or national opposition to a U.S. military invasion abroad,” The Miami Herald reported on July 5, 1987.

People who hate The People never sleep. In 2006 Congress passed the National Defense Authorization Act, which overturns the Posse Comitatus Act of 1878, which prohibited the use of combat troops on the soil of the United States. For the first time in 128 years, the president can declare martial law in case of a hurricane, riot or terrorist attack. In May 2007 Bush attached a National Security Presidential and Homeland Directive to the National Defense Authorization Act. In case of a “national emergency”–the president could declare it without consulting anyone–he could suspend the Constitution and appoint an unelected provisional government under a “national continuity coordinator.”

To an optimist, America’s brushes with fascism seem like comforting evidence that the system works. Despite it all, even taking into account grotesqueries such as the concentration camps for Japanese-Americans during World War II, the First Amendment remains in force. Few Americans feel threatened by government tyranny. Few worry about getting shot by trigger-happy soldiers or being detained in concentration camps (unless they’re flood victims in New Orleans). So why does a democracy need fascist schemes like Reagan’s Rex-84 Alpha Explan (a FEMA plan to put American protesters against a planned war against Nicaragua into camps)? Because American democracy is an iron fist in a velvet glove, a glove that’s becoming increasingly transparent.

Threats of repression are rarely carried out. They don’t need to be. If potential opponents are afraid, there’s little need for concentration camps. The threat of repression (and actual crackdowns, explained away as exceptional excesses and brushed off with a token apology) creates a chilling effect on people who might pick up a rock instead of a sign.

A dog doesn’t have to bite everyone every day to earn a fearsome reputation. Mount cameras all over the place, and you don’t need to have anyone actually watching on the other side. In a country whose legal framework authorizes the government to kidnap, torture and murder them, opponents of U.S. policy must decide whether getting out of line–anything from a letter to the editor to direct action–is worth the risk of getting kidnapped, tortured and murdered.

(Ted Rall is the author of the book “Silk Road to Ruin: Is Central Asia the New Middle East?,” an in-depth prose and graphic novel analysis of America’s next big foreign policy challenge.)

http://www.columbiacitypaper.com/2008/1/18/american-democracy-relies-on-fascism
Posted by Alex Constantine at 11:49 AM