Negroponte: US has used Waterboarding in Past 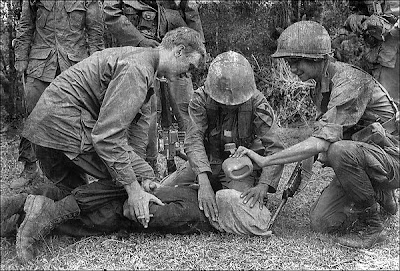 Also See: Attending Physician: Jimi Hendrix was Waterboarded to Death w/Red Wine
•••••••
US has used waterboarding in past: ex-spy chief

WASHINGTON (AFP) — Former US spy chief John Negroponte admitted that the United States has used a controversial interrogation technique known as waterboarding but does not anymore, according to a published interview Monday.

Negroponte, who currently serves as deputy secretary of state, told the National Journal that the country has made improvements and that it has been years since interrogators used the simulated drowning technique, often described as torture.

http://afp.google.com/article/ALeqM5i1UF5Iam5nCeXuqrEiL7UepLKtjQ
"We've taken steps to address the issue of interrogations, for instance, and waterboarding has not been used in years," Negroponte told the magazine.
"It wasn't used when I was director of national intelligence, not even for a few years before that."

Negroponte, a career diplomat, was named by President George W. Bush to be director of national intelligence in February 2005, a position he held until 2007.

The CIA has been embroiled in a controversy over the destruction of videotapes that allegedly showed the use of torture during Al-Qaeda interrogations.

The top US law enforcer, Attorney General Michael Mukasey, this month announced a criminal investigation into the matter after the CIA chief in December admitted that the agency had destroyed tapes of harsh interrogations of two Al-Qaeda suspects in the months after the 9/11 attacks.

The tapes reportedly showed the two suspects undergoing waterboarding, and were made in 2002 and destroyed in 2005 to protect the identity of agency operatives, CIA chief Michael Hayden said.

The White House has insisted that the United States does not torture anyone, but refuses to confirm what tactics might have been used to prise information out of reluctant detainees.s
Posted by Alex Constantine at 4:24 PM