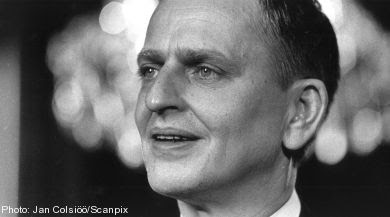 Olof Palme cooperated with officials from the CIA and U.S. Embassy on several occasions early in his career as a student leader and political activist.

A declassified U.S. government document shows that Palme passed information to the American Embassy on communist sympathizers in Sweden in 1950.

According to Dagens Nyheter, the CIA was also actively recruiting the young activist as an agent for the U.S. intelligence service.

Palme went on to become one of the most influential figures in Swedish politics, serving twice as Prime Minister, and as leader of the Social Democratic Party from 1969 until his assassination in 1986.

Palme’s contacts with the U.S. occurred when he was active in student politics and working to build up a western-leaning international student organization as an alternative to the International Union of Students (IUS).

The IUS was thought to be controlled by the Soviet Union.

In a meeting at the U.S. Embassy in Stockholm following his participation in a Prague conference organized by the IUS in 1950, a 23-year old Palme remembered three of names of fellow Swedes who also attended the conference were thought to be Communist activists at the time: Gunnar Claesson, Gunnar Svantesson and Hans Göran Franck.

Prior to the 1950 meeting at the U.S. Embassy, Palme also had well established contacts with the CIA station chief in Stockholm who wanted to recruit Palme as an agent.

According to a 2003 interview with American political scientist Karen Paget, former CIA agent Tom Farmer explained that he and Palme had a good working relationship. However, upon discovering the CIA’s Stockholm station chief’s interest in recruiting Palme, Farmer thought it was a bad idea and that it would merely offend Palme.

Palme was also actively engaged in helping the Swedish military intelligence services during the same period, giving them information about his trips behind the iron curtain as a student leader in the early 1950s. He was also involved in building up the “Stay Behind” network, a top secret Swedish resistance movement trained to be activated in the case of Soviet occupation.

In December 1950, Palme organized a conference in Stockholm which led to the creation of the International Students Conference. The CIA, which was secretly funding the organization, wanted Palme to lead ISC. Palme was more interested in pursuing a career with the Swedish Foreign Ministry, although he was a member of the organization during the ISC’s early years.

“It was an additional secret channel to the Americans. But Palme was no CIA agent. If anything, his own interests and convictions coincided with American intelligence strategies during those years,” said Engman.

However, according to Palme’s son Mårten Palme, his father was disappointed by the CIA’s involvement in the ISC.

“It’s accurate to say that Olof was inspired early on by American ideals. Not the least when it came to his politics. But he told no one of his contacts with American agents in the 1950s, other than that the CIA had infiltrated the ISC and that this disappointed him,” he said.