The Two Sides of Richard Armitage 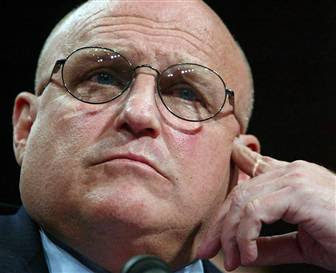 Two articles here. The first concerns the wretched past of Richard Armitage, the second his "Smart Power" Project at the Center for Strategic and International Studies, a seemingly liberal program that advocates undoing much of the destruction caused by the rogue Bush administration - destruction that Armitage himself had a fat invisible hand in.

This Janus Armitage is a feral piece of work, not the Obamaesque reformer that compromised media outlets make this murderous jackal out to be.

Back at the Iran-contra ranch, on February 24, 1986, 4:44 pm, a furious military intelligence agent contracted by the CIA, DIA and ISA dialed (202) 695-4351, the desk of Assistant Secretary of Defense Richard Armitage, to inquire about "his alleged involvement in a house of prostitution for senior military officers, intelligence agents, and informants in Southeast Asia." Scott Barnes, the interrogator, also wanted to know "about his work with Vang Pao and drug money laundering."1

Barnes had discovered these connections while on assignment in South
Vietnam searching for POWs. He didn't find POWs, exactly. What he found
in Vietnam was American pilots with CIA connections imprisoned on charges of attempting to smuggle opium out of the country AFTER the war.

Four days later, he was on the phone with Dave Hall, assistant special agent
in charge of the Inspector General's office, to discuss Armitage's "connection with drugs and prostitution in Southeast Asia and his continued involvement with Mr. [Patrick] O'Rourke running guns." The IG inspector said that he had heard of "a possible connection," and put up, "former Ambassador Phil Habib was also involved." An Army major general had written the IG to expose "Armitage's and Habib's alleged involvement in prostitution in a Da Nang house of prostitution and in [money] laundering out of Southeast Asia to the Philippines and to Sidney, Australia, using Air America, Vang Pao connections and secret airlines."1

1978: Armitage joins the staff of Senator Robert Dole of Kansas.

1980-81: He joins the presidential campaign of Ronald Reagan, is appointed
as senior advisor to the new president's Interim Foreign Policy Advisory Board.

1985: Ferdinand Marcos is making a mess of it in the Philippines. The
embattled dictator is toying with the notion of reinstating General Fabian Ver as armed forces chief of staff. The General has been fingered by the
Agrava Commission for complicity in the 1983 murder of President Begnino S. Aquino at an airstrip by gun-slinging terrorists. Nonetheless, Marcos refuses stubbornly to appoint anyone but General Ver to the post, an
"interim" chief of staff is installed, Reagan wrings his hands and sweats it out.

There are plans to dismantle Marcos and his dictatorship. In January, a
well-dressed wing formation of American officials swoop into Manila. It is
Paul Wolfowitz, assistant secretary of state for East Asia, Richard Childress of the NSC, Richard Armitage, assistant secretary of defense for international affairs. They've come to whip Marcos into line, insisting that he "reform" his military forces to crush the scattered but rising "Communist" backlash - that is, starving peasants pushing against unemployment, death squad rule, crony capitalism and general squalor - without provoking further scandals that could return to haunt the Reagan administration...2

He's been a puffy-chested diplomat, military strategist, drug runner, money
launderer and "solicitor." The rewards can be enormous ... And a good
"counter-terrorist" who knows the ropes, with the right connections ...

He was one of the signatories of the notorious Project for the New American
Century (PNAC) letter to President Clinton in 1998. Armitage was a board
member for CACI, a private military contractor (with revenues of $1.5 billion in 2004), headquartered in Arlington Virginia. CICI employed four of the salacious, murderous interrogators at Abu Ghraib prison.

A voice whispers, "what was he really doing over there?" The Independence
web site offerws a peek at his secret life: "Richard Armitage became Deputy
Secretary of State in March 2001." A few months after George W. Bush was
selected president, Armitage moved over to "agent in place" status. And a
well-qualified one: "He was a professional ASSASSIN in Vietnam, Laos and
Cambodia during the Vietnam war. He led ASSASSIN teams similar to the
PHOENIX program that killed and tortured tens of thousands of Asians."

"After Vietnam he worked for the Defense Department on arms sales in Iran
and other countries.... He was an intimate insider in the Iran/Contra
illegalities. He has been accused of links to illicit gambling, drug smuggling and expansion of organized crime in Russia, Central Asia and the Far East..."3

This is the man who would play a leading role in Middle East "security" policies under G.W. Bush.

Picture, for a moment, a secret "strategic alliance" between Science Applications International Corp., in San Diego, the penultimate, classified
military-industrial-intelligence contractor, and mass-murderer Armitage, in
control of all those gigabytes.

The emerging world as Armitage saw it during his Senate confirmation hearing in March 2001: "American leadership will be the central reality of the
international system for as far as the eye can see..."

1) Scott Barnes with Melva Libb, "BOHICA," Scott Barnes, Bohica Corp., 1987.
Phil Habit was known as "Mr. Foreign Service" to his subordinates. Babib was
raised in Brooklyn and joined the service after WW II. Habib was at the
forefront in negotiations to end the Vietnam War, ambassador to East Asia
under President Gerald Ford. From 1981-83, he was Reagan's special envoy to the Middle East. Raymond Bonner of the New York Times writes, "Some of the missions he undertook in his career are still not known about publicly. Nor will they be, at least not from Habib."

Richard L Armitage was US Deputy Secretary of State from 2001 to 2005 under President George W Bush. He is a Republican. Joseph S Nye Jr is a Professor of Government at Harvard. He also served as an Assistant Secretary of Defence for international security affairs in the Clinton administration. He is a Democrat.

The two men co-chair the bipartisan Commission on Smart Power, under the auspices of the Center for Strategic and International Studies (CSIS), an influential Washington think-tank.

The Commission released its report on November 6, exactly one year before the presidential election. The main objective of the CSIS Smart Power project is to provide US policymakers, particularly the next president of the United States, with a strategic vision for integrating soft and hard power tools into "Smart Power", in order to address current and future challenges and opportunities in the international arena and to chart a new approach to foreign policy.

Smart Power, as explained by Mr Armitage and Dr Nye in a recent Washington Post article, is essentially "a smarter strategy that blends [US] 'hard' and 'soft' power", that is, American economic and military might with the "ability to attract and persuade", in exercising world leadership.

The Smart Power report recognizes that there is general, global dissatisfaction with America's attitude to the world. Notably, most foreigners do not believe that America can be trusted to act responsibly and President Bush is seen as a threat to world peace. America has dissipated the considerable sympathy aroused by the 9/11 atrocities and its standing, reputation and influence are at an all-time low. The report argues that this matters a great deal for the security and prosperity of the United States.

The report is brutally frank, identifying five significant causes for America's declining influence: the backlash against America's status as the sole superpower; a perception that globalization only benefits America and is simply a cloak for American economic and cultural imperialism; America's increased unilateralism and rejection of the United Nations and international, multilateral agreements; America's fearful and isolationist reaction to 9/11, its often simplistic and arrogant conduct of the so-called "War on Terror" and its double standards on human rights and international law; and perceptions of American fallibility and incompetence, based on poor managerial performances in Iraq and in the wake of Hurricane Katrina, and flawed domestic policies on health care and immigration.

The report argues that it is not too late to turn things around and makes the case for a broader, more balanced, "smarter approach".

The Smart Power project is based on the premise that effectively addressing the main foreign policy challenges facing America today requires deploying the full spectrum of tools available to the US Government, ranging from public diplomacy and educational exchanges to counterterrorism, economic development, health and energy security. The report therefore presents five specific recommendations, whereby the United States should:

"invest in a new multilateralism" by reinvigorating the alliances, partnerships and institutions that allow it to address numerous hazards at once without having to build a consensus from scratch to respond to every new challenge; create a Cabinet position for global development and aid for a more unified and integrated aid programme that aligns US interests with the aspirations of people worldwide, starting with global health; reinvest in public diplomacy within the government and establish a non-profit institution outside of it to build people-to-people ties, including doubling the annual appropriation to the Fulbright programme;

sustain its engagement with the global economy by negotiating a "free trade core" of countries in the World Trade Organisation, willing to move directly to free trade on a global basis, and expand the benefits of free trade to include those left behind at home and abroad; and take the lead in addressing climate change and energy insecurity by investing more in technology and innovation.

Over the next year and a half, Mr Armitage and Dr Nye, along with the other eighteen Smart Power Commissioners, representing a cross-section of eminent Americans, in addition to CSIS scholars and staff, will travel around the United States conducting a broad-based, national discussion about America's role in the world, which should provide feedback that would further inform the findings of the report and, hopefully, the future development of US foreign policy.

If the United States is once more to be, as Mr Armitage and Dr Nye put it, "a force for good in the world", then much will depend on their own ability to persuade people that America has more to gain from being perceived as a friend than as a bully, a willing partner in multilateral consensus-building rather than a swaggering, threatening leader of the "Coalition of the Willing", a leader in investing in the global good rather than an uncaring, inward-looking behemoth.

By using Smart Power, the two co-chairmen argue that America can become a "smarter power". The world needs a smarter America. Let us hope that the CSIS Commission can convince their fellow citizens of this imperative.
Posted by Alex Constantine at 12:27 PM