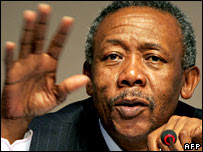 It said Selebi had stepped down "in the best interests of Interpol and out of respect for the global law enforcement community that it serves".

The scandal comes against the background of political tension in South Africa, where Jacob Zuma -- Mbeki's rival who defeated him in a bruising battle for the leadership of the ruling African National Congress (ANC) -- will be tried for corruption later this year.

Selebi has long enjoyed Mbeki's backing, but said in his resignation letter to Interpol he had asked the president for extended leave "so that I can devote my energies to clearing my name".

He said he was stepping down with regret because "I do not wish the allegations that have been levelled against me to bring the good work of this august body into disrepute".

In a statement following a series of urgent meetings since Friday, Interpol said the allegations against him had nothing to do with the organisation or with Selebi's position as its head.

Secretary General Ronald Noble said that in his experience, Selebi "has always conducted himself and acted in a way to enhance global security and police co-operation worldwide".

Noble said corruption was one of the most serious offences a police official could be accused of.

"Interpol believes that any such allegations should be prosecuted thoroughly, and the proper manner is for charges to be brought promptly before a court of law and not through media leaks and speculation," he added.

A copy of Selebi's indictment, made available to the media by prosecutors, covers a range of charges that include receiving payments from his friend Glenn Agliotti, a convicted drug smuggler accused of playing a role in the 2005 murder of a South African mining magnate.

The indictment said between 2000 to 2005 Selebi received at least 1.2 million rand (91,000 pounds) from Agliotti and his associates, including 30,000 rand from Agliotti a day or two after magnate Brett Kebble was killed.

The period in question overlaps with his tenure at Interpol, where Selebi became president in 2004. He was elected to the post by its general assembly, which brings together delegates from all member states worldwide.

The president is not in charge of Interpol's day-to-day running but presides over meetings of the assembly and executive committee and plays a major role in setting direction and strategy. Selebi's four-year term was due to end this year.