"Authorized" Biography of Warren Buffett Traces his Road to Wealth 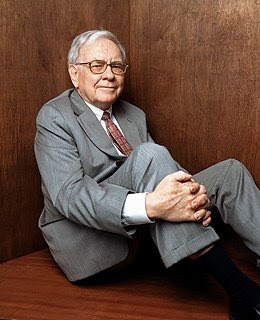 Caveat: Warren Buffett's avuncular centrist image is a lie. Buffett has a secret life. The Berkshire Hathaway billionaire is a covert operator like his Nazi father, Bircher/Senator Howard Buffett, and I've documented this fact time and again over the years. The Great Brainwashed admire his gross wealth and media-propelled seedcorn persona, but deep down Buffett himself doesn't care all that much about money - he lives in a $100,000 house. That's in Omaha, where he is involved in a CIA-operated national pedohile ring with ties to the RNC (see The Franklin Cover-Up, by John DeCamp). Buffett's alleged co-conspirator, Robert Wadman, the disgraced former police chief of Omaha, filed a frivolous lawsuit recently against my publisher in a failed attempt to silence me. Both are linked to the "suicides" of Theresa Duncan and Jeremy Blake, "conspiracy theorists" in the process of connecting the founder of AT&T Cable to the aforementioned pedophile network when they supposedly checked out. No, truth be told, Buffett doesn't care about money - like his father, he cares about covert operations and the nurturing of fascism in America. The rich "Uncle Warren" PR is a cover story for stock manipulation and worse. The media perform the same service for Dr. Kissinger, another fascist covert operator.

As long as these slimy predators are perceived as credible "experts," body bag futures will remain a lucrative investment.

"The Snowball" is a fast-paced, precisely drawn profile of a man who, despite his high visibility in the financial world, isn't someone we've known much about.

We do now. And unless we've been hoodwinked, Warren Buffet lives here, warts and all, on the pages of this authorized biography by Alice Schroeder.

The young Buffett was a financial prodigy but also something of a juvenile delinquent, and the book makes it clear that the man who went on to make a fortune could have wound up in jail instead.

He peddled chewing gum door to door, sold soft drinks and was a newspaper delivery boy. Mostly, though, he saved money. And saved. And saved. By 14, he was filing federal tax returns on his income.

But in junior high, when a new Sears store opened in Omaha, Buffet and some buddies became shoplifters. "We'd just steal the place blind," Buffett recalls. "We'd steal stuff for which we had no use. We'd steal golf bags and golf clubs. I stole hundreds of golf balls."

Early on Buffett displayed an almost obsessive penchant for counting things; now he counted golf balls. But he found it hard to explain to his parents why his closet was overflowing with sacks of them.

Eventually, his father lowered the boom: Quit screwing around or I will forbid you from running your paper routes. Faced with losing his income, Buffet cleaned up his act and went on to make financial history.

Moving through Columbia Business School and a brief stint as a stockbroker, he acquired a textiles company. And part of the Washington Post. And the Buffalo Evening News. And a piece of ABC. And a portion of Coca-Cola.

Schroeder gets bogged down in details and that's the book's chief drawback: As good as her writing is, a good editor could have trimmed this book to a more manageable length.