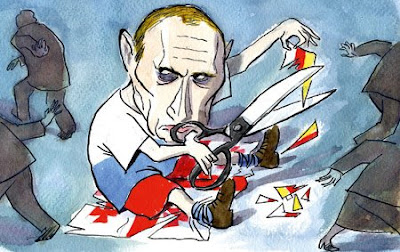 A history of US intervention in Russia and the recent resurgence of Russia
Russia has been under continual attack by the capitalist countries since World War 1 and the Bolshevik revolution. This is not an unprecedented occurrence in world history. After the French Revolution of 1789, most of the other monarchies in Europe immediately invaded France. Why? The revolution was taking power and wealth away from the king, nobles and Catholic church and redistributing wealth downward to the ordinary French people. It was ending feudalism and taking land from the nobles and giving it to the peasants to farm and giving them freedom to move if they wished. This was a threat by example and a huge problem to all the other kings and nobles in Europe. Also, it was a danger to the Catholic church, some of whose great wealth was being seized for the people. Napoleon began his career by acting to counter these foreign invasions as an ordinary French soldier.

Another example is the Paris Commune of 1871. The Prussians had invaded France in the Franco-Prussian war and captured Napoleon III at Sedan and imprisoned him. The French workers had revolted and established a commune in Paris with the Prussian soldiers encamped on the outskirts of the city and afraid to enter because of the barricades and expected strong resistance. The counterrevolutionary wealthy French aristocracy and capitalists established an alternate government at Versailles. All the monarchs in Europe were strongly urging either the Prussians or the counterrevolutionary forces to attack Paris and end the example of the Paris Commune. Czar Alexander II of Russia told Bismarck of Prussia that if the situation in Paris was not resolved soon, he would crush the Paris Commune himself. The Prussians developed a plan. They released all the French prisoners of war and opened a way into Paris for the counterrevolutionaries to attack. After days of fierce fighting on the barricades, the Paris Commune was destroyed and a massacre of workers began. There is nothing to compare to the wrath of the rich when their wealth and power are threatened.

After the Bolshevik revolution, the United States landed troops at Murmansk and Archangel, the Japanese invaded from the east and several other capitalist powers invaded from the west. As a military feat comparable to the Long March by the Communists in China, the Red Army in Russia under the leadership of Leon Trotsky defeated all these foreign forces and also the "white armies" of counterrevolutionaries sent against them. How often is it mentioned in the history books or in the corporate media that Russia has been invaded by the United States? It is an inconvenient truth to steal a phrase from Al Gore.

The next attempt to destroy socialism in Russia was a camouflaged effort obscured by the Second World War. Many American capitalists like Henry and Edsel Ford, the Rockefellers, the DuPonts, the Morgans and many others were sympathetic to fascism in Germany. They appreciated the banning of trade unions by the Nazis, the lowering of worker's wages, deregulation of corporate practices and increased subsidies to German corporations. They also liked the banning of the Communist Party and the imprisonment or assassination of their leaders. Henry Ford is mentioned in Mein Kampf and had a medal pinned on him for helping in the German war effort. Ford trucks for the Nazis were built in France all during the Second World War. James Mooney of General Motors also received the Golden Eagle German medal for his help to Germany. General Motors in Germany built tanks for Nazi forces. ITT built the Focke-Wulf bomber for the Germans. Standard Oil of New Jersey, a Rockefeller-owned company, supplied oil and synthetic rubber to the Nazis. I remember seeing a copy of an original document by an American naval intelligence officer complaining that Standard Oil tankers were refueling Nazi submarines in the Canary Islands. There is in an excellent book by Charles Higham called Trading with the Enemy in which all these facts are documented in great detail. Standard Oil of New Jersey and the German corporation I.G. Farben were so closely connected by agreements and patents that they were practically the same corporation. I.G. Farben used slave labor at the Auschwitz concentration camp in Poland. Standard Oil of New Jersey was so blatant in its support of the Nazis that it was investigated by the Truman Senate Committee. Of course, this went nowhere as the corporations run the government, not vice-versa. Charles McKittrick was the American chairman of the Bank for International Settlements in Basle, Switzerland. He helped the Nazis smuggle gold from the vaults of conquered countries' banks and even from the teeth and jewelry of concentration camp victims into Swiss bank accounts. Another member of this bank was SS death heads member Gerhard Schroder of the Cologne bank. The Chase Bank, owned by the Rockefellers, and the Morgan bank stayed open in Paris during all of the German occupation of France. The Bush family traded with the Nazis, having their steamship line seized by the US government for its conspicuous operation. Many members of British nobility were strongly fascist in their views. That is why Rudolf Hess was able to fly into the Duke of Hamilton's estate and attempt to negotiate with him and other British nobility.

What went wrong? Why didn't Hitler immediately attack the Soviet Union with all his forces if the plot was to destroy socialism there. I think Marge Schott, the owner of the Cincinnati Reds, put it most succinctly when she said that Hitler was doing great in the beginning and then he went "nuts." That is the problem with supporting psychotic madmen. They don't always do what you expect them too. Hitler attacked the capitalist countries to the west to neutralize any threat there and then he acted to expand the German Reich, which was to last a thousand years, eastward into the Soviet Union. He attacked the Soviet Union with nearly 5 million soldiers and millions of puppet soldiers from Romania and other captured states. They were badly beaten by the Russians after tremendous destruction of the Russian cities and countryside. The Red Army destroyed the whole German Sixth Army at Stalingrad in one of the greatest battles in history.People wonder why the United States is so rich after being barely touched by two world wars, while Russia was destroyed to a catastrophic extent and had to rebuild itself with no help from the West. Hitler told the Einsatzgruppen, murderers with uniforms, to kill any communists and Jews they found in Russia. He was intent on carrying out the international capitalists plans to a certain extent. After the war ended, Allen Dulles and the Vatican smuggled Nazi war criminals like Klaus Barbie, Otto Skorzeny and many others to Latin America to help in the fight against leftists there, since they knew many counterinsurgency measures like concentration camps, torture, etc.

The capitalists had to wait 70 years, but their patience and continual pressure paid off when the Soviet Union dissolved in 1991. Did Gorbachev and Scheverdnadze never read Marx about imperialism? Did they think the only goal of the United States was to bring "democracy" to the Soviet Union? The United States brought not only capitalism but "shock therapy" to the Russians. A common joke among the Russians was that they were experiencing a lot of shock, but could find no therapy.

Then the George W.Bush administration let oil companies jack up the price of oil and make obscene profits. This had the unintended consequence of making two countries, Russia and Venezuela, very rich and the United States would have wished these countries to remain poor. Venezuela is headed by a remarkable man, Hugo Chavez, who believes wholeheartedly in socialism and is friends with Fidel Castro in Cuba and Evo Morales in Bolivia. Russia suddenly got rich and powerful and nationalistic feelings began to grow again, even though it is a capitalist country now. When the United States's puppet in Georgia decided to test Russia by attacking South Ossetia and conducting massacres of Russian citizens, he suddenly found out what the Russian bear was capable of in terms of a military response.

The United States is intent on ringing Russia with puppet states, not through military force, but by so-called democratic elections, employing the same techniques they use in this country- a tremendous corporate-funded propaganda machine, electronic voting machines, voter rolls where anyone with a name similar to a felon and likely to vote the wrong way is removed, etc.These elections are the direct antithesis of real democracy and are far from being anything noble, free or pure. Yet they have names like the Rose revolution in Georgia, the Orange revolution in the Ukraine and the Velvet revolution in Lebanon. I would prefer different names for them like the skunk, rotting corpse, or outhouse revolutions. I don't thing Putin or Medvedev are fooled by this false pretense of democracy. The goal of the United States is world domination and I firmly believe they would use nuclear weapons to accomplish it. The best hope we now have is a resurgent Russia and the growth of socialist countries in Latin America.