Evil and Medicine: Why we must Remember Mengele 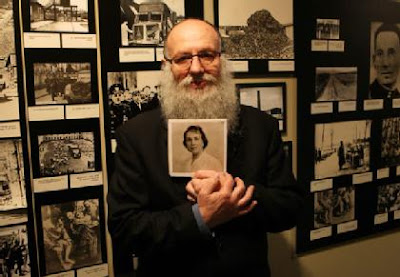 Jewish Holocaust Centre director Bernard Korbman with a picture of his mother, who was forced to work with Josef Mengele Photo: John Woudstra
AUSCHWITZ survivor Sabine Korbman had a terrible secret that she kept from even her only son.

IN 1944, the then Sabine Mann, a Polish Jew, was plucked from the concentration camp population for her Aryan-looking blonde hair and green eyes. She was fluent in German and Latin, so Nazi physician Dr Josef Mengele and his cronies forced her to write up their experiments in their notorious laboratory, Barrack 10.

Those experiments could one day involve a newborn baby being taken from its mother and left to starve to death; the next day, limbs removed from live patients — all in the name of science.

As a warning against history repeating itself, Melbourne's Jewish Holocaust Centre, which Mrs Korbman's son, Bernard, now heads, is hosting an exhibition (starting on November 9) and a public forum (on November 23) on Nazi medicine. They will explore how medical professionals acting for governments used eugenics, euthanasia, extermination and experiments against prisoners.

They will also look at how men trained to heal can do evil: former Bosnian Serb leader Radovan Karadzic, alleged murderer of 8000 Muslims, was a psychiatrist; and al-Qaeda leader Ayman al-Zawahiri is a surgeon. Speakers will include Stephanie Heller, who, with her identical twin, Annetta, was X-rayed and given injections and transfusions in Barrack 10.

It was in a chat in 2003 — six years after his mother died — with Mrs Heller, who volunteers at the centre, that Mr Korbman learned his mother had been in Barrack 10.

Mrs Heller knew her as a Polish linguist with a German name. Other Mengele survivors substantiated her role.

Mrs Korbman told her son little about Auschwitz, but she would often scream and cry in her sleep. She would get hysterical watching films with medical procedures and would say "having a PhD does not make you a 'mensch', meaning, "just because you're a doctor doesn't mean you're a wonderful person, a great humanitarian". Mr Korbman believes his mother was sexually abused in Barrack 10: she once told him, "they did things to me that I don't want to talk about, but sex has been ruined for me".

Her cousin, Isabelle, told Mr Korbman that his mother had been outgoing before Mengele, but was chronically nervous afterwards.

Mr Korbman knew his mother as moody and needy; they bickered and she expected him to ring her every day.

"When I married I had to continually prove to her that my marriage didn't mean that I didn't love her," he said. Learning of the Mengele experiences changed his perspective. "In 2004, I went to Auschwitz, looked up to the heavens outside Crematorium Four and screamed out, 'Why didn't you tell me what people had done to you?'

"Maybe our life wouldn't have been so tempestuous; if I had known some of these things beforehand, maybe there would have been greater knowledge and understanding between us," he said.

The exhibition and forum are at the Jewish Holocaust Centre, Elsternwick; see www.jhc.org.au; phone 9528 1985.