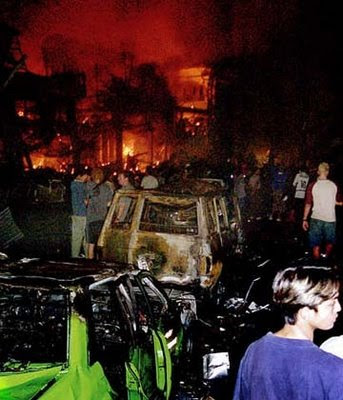 NGRUKI, Indonesia (AFP) — An Indonesian Islamic cleric linked to the three extremists awaiting execution for the Bali bombings said Thursday the 2002 attack which killed more than 200 people was the work of the CIA.

Abu Bakar Bashir told AFP the US intelligence agency had fired a nuclear missile at the Bali tourist strip from a ship off the coast.

"It has been mentioned as being a micro-nuclear bomb, not a regular bomb... The bomb was made by the CIA, it could be no one else," he said in his house at the Al-Mukmin Islamic boarding school on Indonesia's Java island.

He said the attack was a conspiracy between "America, Australia and the Jews" and the three convicted bombers -- Amrozi, Imam Samudra and Ali Ghufron -- had been framed.

"The bomb Amrozi set off, the first one, at most it shattered glass and didn't wound people, or at most wounded them a little," he said, sitting on the floor and wearing the white clothes and skullcap of a religious man.

Amrozi had been "used by the CIA in coordination with America, Australia and the Jews. The police and the prosecutors aren't brave enough to prove it."
The coordinated October 12, 2002 bomb attacks ripped through packed nightspots on the holiday island's main tourist strip and killed 202 people, mostly foreign visitors including 88 Australians.

Radical Islamist preacher Bashir, aged around 70, served almost 26 months for conspiracy over the attacks before being cleared and released in 2006.

He had been accused of providing spiritual leadership to the Jemaah Islamiyah regional terror group, a claim he denies.

His comments come amid speculation the government is preparing to execute the three bombers by firing squad next week, in line with their 2003 convictions.

The executions have been put off by a series of failed appeals and most recently by the Muslim holy month of Ramadan, raising questions about the government's willingness to kill the men ahead of elections in April.

More than 90 percent of Indonesia's 234 million people are Muslims, but most follow a more moderate version of Islam.

Dismissing Indonesia's Islamic groups as "Jewish organisations," he said he would split from the Indonesian Council of Mujahedin which he had led and form a new group to push for pure Islamic law.

He said he would launch the new group, Jemaah Ansharut Tauhid ("partisans of the oneness of God"), on October 25.
Posted by Alex Constantine at 11:34 PM