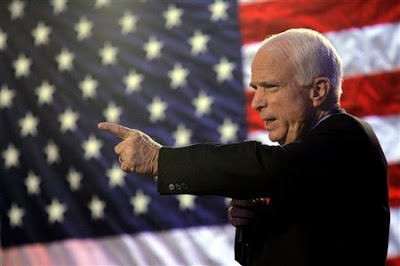 Senator John McCain has been making a lot of baseless accusations lately, but he is the one with the troubling past. McCain and Marylin Shannon — a 2008 McCain delegate and former vice chair of the Oregon Republican Party — both appeared at an August, 1993 fundraiser for the far right Oregon Citizens Alliance. McCain appeared against the advice of Mark Hatfield, a GOP senator from Oregon, who feared that the group’s extremist views would taint McCain.

Shannon, who attended this year’s Republican National Convention as a McCain delegate, spoke immediately before McCain and “praised the Grants Pass woman accused of shooting an abortion doctor in Wichita” earlier in the month, referring to her as a “fine lady.” When McCain spoke next, he said nothing about Shannon’s vile comments and delivered his speech as prepared.

Between 1977 and 1993 there were “36 bombings, 81 arsons, 131 death threats, 84 assaults, 2 kidnappings, 327 clinic invasions, 71 chemical attacks, more than 6,000 blockades and related disruptions” against reproductive health clinics. Congress was finally spurred into action by the killing of Dr. David Gunn outside a Florida clinic in March of 1993. In August, Dr. George Tiller was shot and wounded in Wichita.

“When anti-choice extremists were terrorizing American women and their doctors, John McCain had multiple opportunities to make what should have been an easy choice,” said Kathryn Kolbert, President of People For the American Way, and a longtime women’s rights advocate who successfully argued a crucial abortion rights case before the U.S. Supreme Court in 1992.

“But he chose political expediency over law and order. He didn’t say a word when Marylin Shannon sympathized with an attempted killer. He voted against the clinic access bill even as everyday Americans were being assaulted and besieged by domestic terrorists. As someone who faced repeated threats for work on behalf of reproductive rights, I am deeply disturbed by John McCain’s willingness to stand with and side with sympathizers and enablers of domestic terrorism.”

Shocking. Blue Oregon has the dirt on McCain’s keynote address at a 1993 fundraiser for the Oregon Citizens Alliance (OCA) headed up by Lon Mabon. The OCA was responsible for numerous anti-gay ballot initiatives up until their last attempt in 2000. If you’ve lived in Oregon for any amount of time, you know the OCA and their hateful and often violent ways.

It seems that the media is having a lot of fun these days digging up old acquaintances of presidential candidates, finding an objectionable comment, and then badgering the candidates into denouncing those folks.

It doesn’t seem to matter how tenuous the “relationship”, how long ago it was, or anything.

So, courtesy of Jeff Mapes (who has an excellent post about John McCain’s temper), here’s a little snippet from a long-ago Oregonian article.
It seems that in 1993, John McCain was the keynote speaker at a fundraising banquet for the Oregon Citizens Alliance, the notorious anti-gay organization that was causing all sorts of trouble in Oregon in the 1990s.

McCain quickly got a first-hand flavor for the OCA. Marylin Shannon, the vice chairwoman of the Oregon GOP, had a spot on the program to give an opening prayer. In short order, she praised the Grants Pass woman accused of shooting an abortion doctor in Wichita and thanked the Lord “for Lon Mabon and the vision you put in his heart.”

Let’s check that again. Marilyn Shannon praises a terrorist who shot a doctor while introducing John McCain, and not only does he stay, he stands up and gives a fundraising address for these terrorist-lovers?

Outrageous. Will John McCain do what he should have done 15 years ago - and denounce the domestic terrorists who shoot doctors who provide legal medical services?