Copy of the indictment against Sheriff Presgraves.

Also see: "Presgraves Indicted - Page Sheriff Banned From Daily Duties, Could Get 300 Years": "CHARLOTTESVILLE - After entering a not guilty plea to a 22-count indictment that alleges numerous crimes from sexually assaulting women to taking bribes, Page County Sheriff Daniel Presgraves looked up at a federal judge and said, 'I'm still the sheriff.' ... "
http://www.rocktownweekly.com/news_details.php?AID=32637&CHID=1 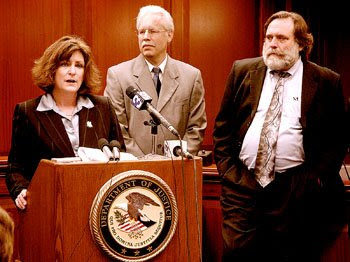 Julie Dudley, acting U.S. attorney for the Western District of Virginia, announces a 22-count federal indictment against Page County Sheriff Danny Presgraves at a press conference in Charlottesville on Thursday. Also in attendance were Brian Haaser (center), USDA special agent in charge of the Northeast Region; and Thomas Bondurant, criminal chief for the U.S. Attorney's Office.

CHARLOTTESVILLE, Va. (AP) — A rural Virginia sheriff faces racketeering, conspiracy and other charges stemming from accusations that he took bribes in exchange for promising not to interfere with a cockfighting ring.

Presgraves, 46, pleaded not guilty at a court appearance and was released on $50,000 bond. If convicted of all charges, he faces up to 304 years in prison.

U.S. Magistrate B. Waugh Crigler warned that he would not hesitate to throw Presgraves in jail if he violates an order not to carry out his duties as sheriff while the case is pending.

"He's not going to parade around in Page County in a sheriff's uniform or in a sheriff's car," Crigler said. "If I was indicted, do you think they'd let me put on a black cape and do this job? I don't think so."

Presgraves' attorney, David G. Barger, did not officially object but told the judge the sheriff was "re-elected under the cloud of this investigation" and that the order essentially voids the citizens' votes. ...
•••••••
Alleged Bribes ‘Tip Of The Iceberg'
By Pete DeLea
www.rocktownweekly.com/

... Following the bribery tip, federal investigators say they began looking into the cockfighting pit known as Little Boxwood in the Kite Hollow section of Page County, just outside Stanley.

On Sept. 18, 2007, four Virginia men were indicted in connection with the cockfighting ring. Prosecutors say that one of the men, Albert Taylor, 66, of Luray, took two $500 payments from an undercover agent, posing as a potential buyer of the pit, and gave them to Presgraves through campaign donations so the sheriff would look the other way.

Two of the four men pleaded guilty, one was convicted by a jury and Taylor is set to stand trial in December.

Also unsealed Thursday was a second indictment related to the cockfighting ring.

Prosecutors say Fannon made campaign contributions to candidates and that VGBA illegally reimbursed him.

Dudley said the investigation into Presgraves' role in the cockfighting operation led to a widespread public corruption case.

"Alone, the allegation that an elected official took bribes from the operators of an illegal cockfighting pit is a serious claim," Dudley said. "However, bribes were just the tip of the iceberg, just the outer layer of broader criminal conduct uncovered throughout the course of this investigation."

In addition to bribery allegations regarding the cockfighting ring, federal prosecutors allege that Presgraves committed a variety of crimes.

Some of the counts listed in the indictment stem from allegations that the sheriff abused his power over 12 women working for the sheriff's office. They claim Presgraves sexually harassed and assaulted the workers.

In other allegations, prosecutors allege Presgraves diverted $39,000 from the U.S. Customs Service and $47,000 from PayTel, a company contracted to install pay phones in the jail, to an escrow account rather than the county treasurer, which is required by law.

They also claim Presgraves was involved in a structuring scheme between 2001 and 2004. They say he deposited more than $100,000 in cash to checking accounts in amounts smaller than $10,000 in an attempt to avoid federal detection. It's unclear where that money came from.

Prosecutors also say he used inmate labor for personal projects and accepted bribes from a local corporation, which they wouldn't name.

On May 29, FBI and Internal Revenue Service agents confiscated financial documents and "company-related money" from four Page County properties owned by William and Isaac George, including a home and two IBR Corp. buildings, all near Luray, and the Valley Exxon near Stanley.

The Georges' attorney said Presgraves was the focus of the raids and his clients were questioned by federal agents about the sheriff. Some of the documents seized mentioned Presgraves, according to court documents. No charges have been filed against the Georges, but the investigation into IBR, which produces poultry, continues, prosecutors said.

Dudley said Wednesday's indictment shows that no one is above the law and residents should be able to trust their officials.

"They must know that their elected officials are being held to the highest legal and ethical standards," she said. "They must know that when even high-ranking members of the law enforcement community are accused of breaking the law, they will be prosecuted."
Posted by Alex Constantine at 4:16 PM