Exhortations of Jesus and Invisible Orwells - Who are The Naomis? 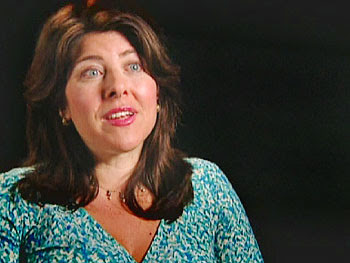 Like Naomi Klein, who does a superfiicial job of writing on fascism ("let's all look for the 14 warning signs of fascism" ... if one needs a checklist, one hasn't a clue), Ms. Wolf is a fixture of the establishment left.

She was married to David Shipley, deputy editorial page editor and Op-Ed editor of the New York Times - can't get much more establishment than that. Wolf is a Yalie. "All of my friends run the mainstream media," she acknowledged at a Borders' lecture.

Another friend is the Son of God - only the elite (she doesn't mess around) :

" ... In 2006, Scotland’s Sunday Herald carried an interview in which Wolf claimed that, while meditating, she had a visual experience in which she was a 13-year-old boy sitting next to Jesus. ... "
http://en.wikipedia.org/wiki/Naomi_Wolf

Notice how I'm generally responsible, not given to preposterous, self-destructive public statements? That's because the cause of anti-fascism will suffer if one makes a fool of oneself. If Ms. Wolf can't repress the urge to discuss her religious hallucinations with the "mainstream" press, she's pissing in MY (anti-fascist) punchbowl ...

"I heard from a citizen—but never read in the suburban press—that people he knew had opened their luggage after a flight to find letters from the Transportation Security Administration that said that they did not 'appreciate' the reading material, critical of the administration in power at that time, that these Americans had carried in their personal possessions."

This is a trumped-up, mangled, hyperbolic bit of "reporting" on an actual incident that did occur in Seattle, and was widely reported. CNN - not merely the suburban press - had a segment on it. There was no involvement by the TSA proper. An airport employee had written a note in the margin of a TSA inspection form: "Don't appreciate your anti-American attitude!"

Wolf inflated an episode she'd heard about second-hand - it redounded on a lone employee, not the police state, as any watcher of CNN could have told her ... and done a better job reporting it.

No Orwell in the details. No "letters." No accuracy in reporting - just one more liberal establishment voice making resistance to fascism appear to be the domain of hallucinating donut heads.

Couldn't Wolf discuss something - oh, I don't know - real with CNN, given her widely-bruited wealth of knowledge on the topic of fascism?

TSA's response: "We do not condone our employees making any kind of political comments or personal comments to any travelers," TSA spokeswoman Heather Rosenker told Reuters (the "suburban press" that supposedly ignored the story). "That is not acceptable."

Neither are Ms. Wolf's irresponsible, ego-syntonic antics.
Posted by Alex Constantine at 12:08 PM