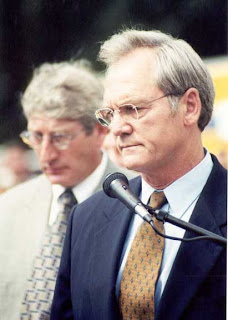 Federal prosecutors in Alabama apparently felt the need to create a fantasy world in their efforts to prevent a new trial in the Don Siegelman case.

In a document dated August 27, 2009, the government responded to a “Motion for a New Trial Based on Newly Discovered Evidence” that had been filed by Siegelman and codefendant Richard Scrushy.

Regarding Rove, prosecutors state that the former Bush White House adviser denied contacting anyone at the Justice Department regarding the Siegelman case. In fact, Rove did no such thing. He either contradicted himself or used hedge language (”not that I recall,” “not to my knowledge”) in all of his answers to questions about his possible involvement in the Siegelman case.

And as we reported on August 13, Rove certainly did not deny that someone working for him might have contacted the Justice Department regarding the Siegelman case:

When asked if anyone from the White House Office of Political Affairs (OPA), Republican National Committee (RNC), or Republican Governors’ Association (RGA) communicated with the Justice Department, Rove’s answer is “not to the best of my knowledge.”

Under questioning from House Judiciary Committee Counsel Elliot Mincberg, Rove also did not deny that he or someone working for him might have contacted any number of key officials in Alabama, including those working for the Justice Department:

Mincberg goes on to ask if Rove or anyone from any GOP-connected groups had communicated about Siegelman with:

* The Alabama attorney general’s office or any other state law-enforcement agency;

* Bill Canary, head of the Business Council of Alabama;

* Bob Riley, Rob Riley, or anyone in the Riley administration; or

* Members of the media or press.

As we noted in our previous post, Mincberg hit Rove with a couple of “money questions,” which covered the entire Siegelman episode. Here was one of them:

Q: Again, in the period of time between Governor Siegelman’s election and the end of 2002, did you or anyone working for you ever have any communications with anyone about a possible criminal investigation, prosecution, or illegal acts by Governor Siegelman?

A Not that I’m aware of.

The bottom line? Did Karl Rove, as the government contends, deny having contact with anyone at the Justice Department regarding the Siegelman case? Not even close.

What about efforts to counter Jill Simpson’s testimony? The government is deceitful about that, as well.

In its response to the Siegelman/Scrushy motion, prosecutors state:

The Conyers Report itself acknowledges that the only other parties who should have firsthand knowledge of these allegations-Rob Riley, Bill Canary, and Terry Butts, as well as another person present with Riley on November 18, 2002, Matt Lembke-have all denied Simpson’s accusations including that such a phone conversation ever occurred, in sworn affidavits submitted to the House Committee.

In fact, Bill Canary presented no sworn statement to the House Committee. Riley, Butts, and Lembke did present affidavits, but they did not deny Simpson’s allegations or that a phone call took place.

Here is how we characterized the Riley/Butts/Lembke affidavits in a post dated October 23, 2007:

“I do not believe that I have ever met or spoken with Judge Mark Fuller . . .”

“As I recall, none of us were ever outside each other’s presence on that day . . . ”

Lembke
“I do not recall the phone call that Ms. Simpson claims took place between her . . . ”

“I do not believe that I was out of Justice Butts’ and Rob Riley’s presence for 11 consecutive minutes . . . “

So is the government’s statement accurate–that four key people denied Jill Simpson’s allegations and denied that a phone call even took place? Again, not even close.

To use blunt language, federal prosecutors resort to repeated lies in their efforts to prevent a new trial in the Siegelman/Scrushy case. And the lies are not related to an arcane, minor element of the case. The false statements pertain to the Siegelman/Scrushy claims of a selective prosecution–the very heart of the matter.

The falsehoods noted above come in the section where prosecutors try to counter the Siegelman/Scrushy claims that the government acted with discriminatory intent.

A reasonable person might ask: Why would prosecutors resort to lying in their argument about discriminatory intent in the Siegelman/Scrushy matter?

A reasonable person might answer: Maybe it’s because prosecutors know they acted with discriminatory intent and don’t have a legitimate answer for it.

Roger Shuler resides in Birmingham, Alabama. A 1978 graduate of the University of Missouri, Shuler worked 11 years as a reporter and editor for the Birmingham Post-Herald before working 19 years in several editorial positions at the University of Alabama at Birmingham (UAB). He blogs at Legal Schnauzer.