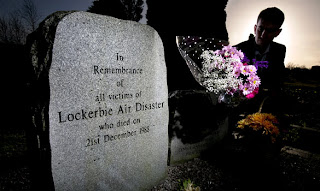 LONDON — In an admission likely to prolong the controversy over the release of the only man convicted in the 1988 Lockerbie bombing, Britain’s justice minister told an interviewer that trade deals, especially in oil, had been a “very big part” of Britain’s decision to include the bomber in a prisoner transfer agreement with Libya.

In an interview published Saturday by The Daily Telegraph, Jack Straw, the justice minister and a senior member of Prime Minister Gordon Brown’s cabinet, said trade deals with Col. Muammar el-Qaddafi’s government in Libya weighed heavily in his decision to abandon his opposition to the release of the bomber, Abdel Basset Ali al-Megrahi.

Asked by a Telegraph reporter whether trade and oil were part of the cabinet decision to include Mr. Megrahi in a prisoner transfer agreement with Libya, Mr. Straw replied: “Yes, it was a very big part of that. I’m unapologetic about that. Libya was a rogue state. We wanted to bring it back into the fold and trade is an essential part of it — and subsequently there was the BP deal.” ...

Britain gave Libya aid payments to help with its prison reforms while the discussions for the release of Lockerbie bomber Abdelbaset Ali Mohmed al-Megrahi were ongoing, it can be revealed.

The grant of £146,000 is highly unusual because – unlike other poor African countries – Libya is well off as a result of its natural resources.

It is ranked as an "upper middle income" country by the British Government. The grant is believed to be the first time since the Lockerbie bombing of 1988 that Britain has provided aid to Libya.

The payment appears in the small print of a recently-published report from the Department for International Development (DFID) for the financial year 2007-8: just when British-Libyan relations were improving significantly.

At the time, Colonel Muammar Gaddafi, the Libyan leader, was pushing for the release of Megrahi and British firms were negotiating multi-million pound contracts for oil, gas and other rights in the north African country.

However, inquiries by this newspaper have established the aid was, in fact, a discretionary payment from the British Embassy in Libya to encourage greater human rights in Libyan prisons.

It came, not from DFID, but the Foreign and Commonwealth Office (FCO) budget.

Senior Tories say the timing of the aid is "suspicious" and looks like a "sweetener" to Libya. They say it was given months after Tony Blair met President Gaddafi on his "farewell tour" in May 2007.

It also coincided with moves by Lord Mandelson, then the European Trade Commissioner and now Britain's Business Secretary, to strengthen Libya's relations with the European Union.

A spokesman for the FCO confirmed the existence of the grant saying: "The UK government continues to look for ways in which we can work with the Libyan government to improve the human rights situation in Libya.

"At present we are working closely with the Libyans to help them improve the quality of their prisons and to improve the capacity of Libya's human rights society.

"The Embassy has funded a large prison reform project, which is implemented by the International Centre for Prison Studies, King's College London.

"The project aims to improve the standards of Libyan prisons, transforming them into centres for reform and rehabilitation." ...

Medical evidence that helped the Lockerbie bomber to be released was paid for by the Libyan government, which encouraged doctors to say he had only three months to live.

It was the key medical assessment that paved the way for the release of the Lockerbie bomber: cancer experts who visited Greenock Prison in Scotland to examine Abdelbaset Ali Mohmed al-Megrahi concluded that he had three months to live.

Their verdict, following the visit on July 28, was crucial because, under Scottish law, prisoners could be freed on compassionate grounds only if they were considered to have three months, or less, to live.

Other experts had concluded in June and July that Megrahi, who had an aggressive prostate cancer, had up to 10 months to live. The bomber was duly freed 23 days after the latest assessment.

But today The Sunday Telegraph can disclose that the medical evidence was paid for by the Libyan government, which encouraged the doctors to say that Megrahi had only three months to live.

British and Scottish officials appear to have thought that it would be easier to justify Megrahi’s release to the US government if it was done on compassionate grounds. The disclosures will increase suspicions that they colluded to enable Megrahi, 57, to return to his homeland. Their motivation was that Libya had repeatedly warned that it would sever all trade links with Britain if Megrahi died in prison.

Megrahi’s application for release on compassionate grounds was discussed at a meeting between Libyan officials and Kenny MacAskill, the Scottish justice secretary. It is understood that Mr MacAskill’s staff then provided the Libyans with advice on how to proceed.

Professor Karol Sikora, one of the three doctors who visited Megrahi at Greenock, said this weekend that he had been approached by the Libyans and paid a one-day consultancy fee to draw up a report.

In an exclusive interview with The Sunday Telegraph, the professor, who is the medical director of CancerPartnersUK in London, said he was initially “pessimistic” that the experts could say he would survive any less than a year.

But Prof Sikora admitted that the Libyans had encouraged him to conclude that Megrahi had just three months to live following his examination. “The figure of three months was suggested as being helpful [by the Libyans],” he said.

“To start with I said it was impossible to do that but, when I looked at it, it looked as though it could be done — you could actually say that.” ...