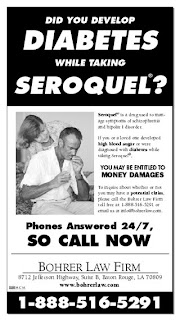 Internal documents from AstraZeneca suggest that the pharmaceutical giant did not tell doctors in the United States about Seroquel diabetes side effects, even after it admitted to doctors in Japan that there was likely a connection between the antipsychotic drug and increased risk of diabetes in users.

The documents were released after Bloomberg News filed a motion to gain access to sealed records produced as part of ongoing litigation for thousands of Seroquel lawsuits filed against AstraZeneca. The litigation involves claims that AstraZeneca failed to adequately warn users about potential Seroquel side effects that may increase the risk of diabetes, weight gain, hyperglycemia and a rare movement disorder known as tardive dyskinesia.

Seroquel (quetiapine fumarate) is an atypical-antipsychotic that is a top selling drug for AstraZeneca, generating nearly $5 billion a year in sales. Approved by the FDA in 1997 for the treatment of schizophrenia, it is also commonly used off-label for treatment of anxiety, obsessive dementia, compulsive disorders and autism. Seroquel has been used by more than 19 million people worldwide.

Nearly 20,000 people have filed a lawsuit for Seroquel problems, with all federal cases consolidated for pretrial litigation in an MDL, or multidistrict litigation, that is centralized in the U.S. District Court for the Middle District of Florida. Plaintiffs argue that AstraZeneca actively denied any diabetes risk with Seroquel when asked by U.S. doctors, even though they had already acknowledged that there was a possible connection.

The unsealed documents also show that AstraZeneca found ways to pay and reward doctors who pushed Seroquel to their patients and increased prescriptions for the blockbuster medication. The Bloomberg News report indicates that the drug company paid doctors $750 to $1,500 for speaking engagements promoting Seroquel, and paid for them to have dinner at upscale restaurants. Some doctors even complained that they were not being paid enough and asked for more perks based on the amount of Seroquel prescriptions they had made, according to internal documents. The doctors’ names were withheld as part of the court order unsealing the records.

Earlier this year, two of the first cases set for trial in the federal MDL were dismissed after the court determined that those plaintiffs could not establish that their diabetes was caused by Seroquel under Florida law. The first trial for a Seroquel lawsuit is now scheduled to occur in Missouri state court in October 2009.